by HowStuffWorks.com Contributors
Prev NEXT
2

Hello, My Name is Olympics 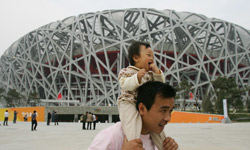 A man poses with his baby outside of the National Stadium or "Bird's Nest" in Beijing. China has experienced a surge in Olympic-themed baby names.
China Photos/Getty Images

Beijing was named the site of the 2008 Olympic Games back in 2001. The honor of h­osting the games is always guaranteed to put a city in the spotlight, foster a boom in infrastructure and bring in a truckload of revenue from tourism. But in the case of Beijing, it also infused the Chinese with great pride. China wanted to show the world that despite negative impressions of the Communist regime, it could pull off one of the greatest feats of diplomacy, hospitality and showmanship. The opening ceremony, which took place at 8:08 p.m. on Aug. 8, was considered an auspicious time to deliver children. And while it was unlikely that many mothers would give birth at the same moment as the ceremony began, parents found other ways to commemorate their newborn children and the Olympic Games. Nearly 3,500 children were named Aoyun, or "Olympics." Thousands more found namesakes in the Chinese Olympic mascots: Bei Bei, Jing Jing, Huan Huan, Ying Ying and Ni Ni. For more on this baby-naming trend, read Have thousands of children in China been named "Olympics"?