The Light Flickers: Roots of the Enlightenment 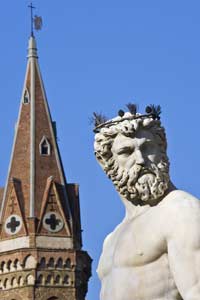 During the Dark Ages (A.D. 500 to 1100), scholarship languished in Western Europe. The Holy Roman Empire, which began officially in 962 with the coronation of Otto I, was dominated by feudalism, and the peasant masses had little access to education. As dictated by the Roman Catholic Church, Latin was the dominant language, and monasteries and abbeys were the centers of academic life. That setup left scant room for intellectual advancement.

But beginning in the 13th century, the tide began to change. A revival of interest in classical Greek and Roman texts ignited a new curiosity about the physical world and man's place in it. While studying at the University of Naples, a Dominican monk named Thomas Aquinas got his hands on the texts of Aristotle, which had been translated recently into Latin [source: McInerny and O'Callaghan]. Those readings inspired Aquinas' theory of scholasticism, or the study of nature as a means of explaining theology. Another monk, Roger Bacon, also read the Aristotelian translation in the middle of the 13th century. From the Greek philosopher, Bacon devised the notion of studying the physical world as a form of piety, since it focused on God's creation. These two ideas, while conceived under the supervision of the Roman Catholic Church, opened up a space for the innovation and curiosity that culminated 400 years later in the Scientific Revolution.

The resurgence of interest in classical writings spread beyond monasteries and fueled the Renaissance movement in the 14th century. Leonardo Bruni, in the same school of thought as Petrarch, revitalized the classical idea of humanism [source: McKay et al]. Echoed throughout the Enlightenment, humanism emphasized the study of humans and their accomplishments, rather than looking solely to God and sacred texts.

Then, the invention of the printing press by Johan Gutenberg in 1438 provided access to literacy for the masses. People began to shy away from Latin translations, relying on their own native tongues for printing. The press also facilitated the Protestant Reformation. In 1517, Martin Luther nailed the 95 Theses to the door of the Wittenberg Church in Germany, signaling the start of the Protestant branch of Christianity. It, combined with the Thirty Years War, would shake the foundation of the Roman Catholic Church in Western Europe. Heading into the 18th century, the bedrocks of society -- religion, feudalism, education -- had been totally transformed.