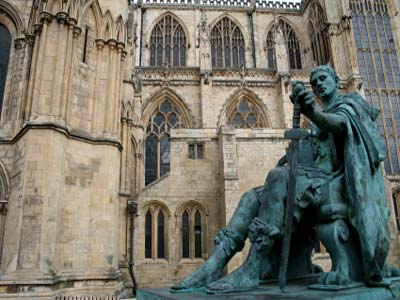 The Roman Empire lasted from 27 B.C. to A.D. 476. In 395, the empire split into eastern and western divisions after the Emperor Constantine converted to Christianity. Constantine established Constantinople as the capitol of the Byzantine Empire in modern-day Asia Minor and the Balkans peninsula. German tribes invaded the western remnants and divided the land among the Goths, Lombards, Franks, Vandals and other clans.

Until 1453, the Byzantine Empire was more or less squared away, but the West spiraled into a frantic land grab. Jumping forward to the mid-700s, the Franks emerged as the most powerful Germanic clan in the West. Things got interesting when Pepin the Short, mayor of the Frankish palace, aspired to become the king of the Franks. Another royal bloodline, the Merovingian, still sat on the throne, but Pepin pulled enough weight as mayor to attract a powerful ally.

­Pope Stephen II lived in northern Italy, nestled between the kingdoms of the Franks and Lombards. The pope sought Pepin's assistance because the Lombards attempted to overtake the papal territory. Seizing the opportunity for mutual gain, Pepin agreed to intervene with the Lombards in exchange for the Frankish crown; the pope was still the ultimate decider in Earthly matters.

Both parties made good on the bargain in 755. Pepin the Short conquered the Lombard kingdom, thus creating the papal states, and Pope Stephen II journeyed to the Frank kingdom to crown Pepin as king. That marked the first time a pope traveled such a long distance, symbolically legitimizing the change in royal lineage from the Merovingian to the Carolingian lineage [source: Barbero and Cameron].

By that time, King Pepin had two sons; the oldest, named Charles, would be known to history as Charlemagne.

His Name is Charles, But You Can Call Him Charlemagne 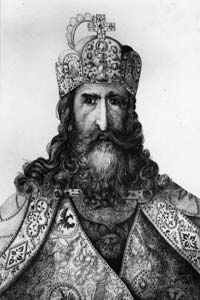 When Pepin the Short died, the Frankish kingdom passed down the Carolingian line to Charles and his younger brother, Carloman. In 771, Carloma­n fell sick and died, and Charles seized control over his lands as well. Charles the Great, aka Charlemagne, proved proficient on the battlefield. Beginning in 773, he conquered the Lombards, Saxons, Arabs and Avars; on today's map, his kingdom would encompass France, Belgium, Holland, Switzerland, Austria and parts of Germany, Italy, Croatia, the Czech Republic, Slovakia, Hungary and Spain [source: Barbero and Cameron].

To the rulers of the Byzantine Empire, Charlemagne's growing kingdom was merely a patchwork of barbaric clans. However, the early Middle Ages king promoted literacy and education among his subjects. Dubbed the Carolingian Renaissance, Charlemagne patronized education and art to an extent unparalleled in medieval Europe. He began with the court schools, where students and scholars could engage in self-directed study [source: Colish]. Along with the secular institutions, the king also revived ecumenical (religious) schools. Architectural projects accompanied the cultural resurgence, with 16 monasteries and more than 230 cathedrals either built or renovated during Charlemagne's reign [source: Stalley].

­Charlemagne also sought to unify the Frankish kingdom under the Christian faith and root out corruption in the clergy. He established Latin, the language of the Roman Catholic Church, as the official tongue. The Byzantine Empire, in contrast, spoke Greek. Believing in the educational power of the public Christian services, or liturgy, Charlemagne attempted to standardize them across the kingdom [source: Colish].

Relations between the church and Byzantium (whose ruler still held the honorary title of Roman Emperor) began to splinter in 726 when Emperor Leo III launched a campaign against iconoclasm, or religious icons. Wishing to prevent idol worship, Leo's decree outlawed Christian symbols, such as crucifixes. The final straw came toward the end of the eighth century when Emperor Constantine VI's mother, Irene, disowned and blinded her son and claimed the imperial title for herself. Balking at the notion of a female emperor, the church council resolved to coronate Charlemagne and split definitively from the Byzantine Empire.

The Donation of Constantine

The Donation of Constantine is a famously forged letter from Emperor Constantine, granting papal ownership of land in northern Italy. Likely composed in the mid-700s, popes leveraged the document to assert authority over that territory in the face of invading tribes, especially the Lombards [source: Medieval Sourcebook]. It serves as yet another example of the papacy elbowing its way into greater political power in the Middle Ages, which culminated with Charlemagne's coronation in 800.