The Copernican Crisis: Scientific Revolution and the Church 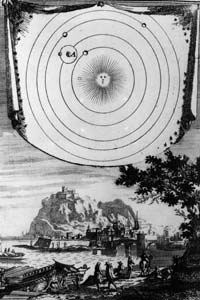 Referred to as natural philosophy, science in the Middle Ages intertwined closely with religion. The church adhered to Aristotle's writings about the structure of the universe since it complemented religious dogma. The Greek philosopher's geocentric universe was composed of 10 separate crystal spheres. Beyond the tenth sphere laid God and heaven [source: McKay, Bennett and Buckler].

One outcome of the Renaissance was a renewed interest in astronomy, and that star-gazing would inadvertently contradict the church's conception of the cosmos. Nicolaus Copernicus shattered Aristotle's theory of the geocentricism when he proposed that planets revolve around the sun in 1543. Copernicus' theory discarded Aristotle's crystal spheres and enlarged the universe to infinite proportions. Though a Christian himself, Copernicus effectively displaced God and heaven and stripped man's central role in the physical realm, which attracted intense criticism from both Protestants and Roman Catholics.

The divorce between science and the church continued in 1609. Johan Kepler, former assistant to astronomer Tycho Brahe, calculated that the planets orbit the sun in an elliptical, not circular, pattern. This also chafed against religious symbolism that upheld the circle as a sign of perfection. Around this time, in the early 1600s, empirical scholar Galileo Galilei was perfecting his telescope. In 1633, the Roman Inquisition charged the astronomer with heresy for his theory that the Earth rotates on its axis, and he eventually recanted.

Francis Bacon and Rene Descartes constructed a philosophical backbone for these scientific breakthroughs. Bacon questioned the mind's ability to solve the mysteries of the natural world on its own. He concluded that experimentation was a necessary component of scientific study and created the scientific method, which was publicized in 1620. Most famous for asserting "I think, therefore, I am," Descartes separated the universe into mind and matter. Cartesian dualism, as it became known, offered an innovative perspective on the individual components in the physical world.

Synthesizing the geometry, physics and astronomy from the previous generation, Isaac Newton outlined the three laws of gravity in the 1687 publication of "Principia." From there, Enlightenment intellectuals spanning the arts and sciences would look to Newton as champion of the human mind to answer the burning questions of existence -- rather than church ideology. Ironically, Newton and his contemporaries were devoutly Christian. Descartes, for instance, attempted to reason his way to explain the existence of God. Though the church didn't heartily embrace their discoveries, the scholars didn't set out to dismantle accepted teachings. That would soon change with the rise of the French philosophes.