The Enlightenment Outside of France 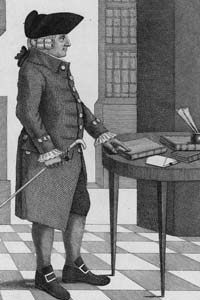 The Enlightenment didn't leave England with Voltaire when he returned to France in 1729. However, the manifestation of the Enlightenment differed from place to place. In France, the aristocracy patronized the arts above all. There, literature flourished with seminal works including Voltaire's "Candide" and Diderot's multivolume "Encyclopedia." England and Scotland, on the other hand, were relatively liberal due to the shift from Catholicism to Protestantism and the rising middle class [source: Gardiner]. That environment promoted advancements in the sciences and economics.

Adam Smith from Scotland published "The Wealth of Nations" in 1776, which laid the groundwork for modern capitalism. Recognizing the power of competition in the marketplace, Smith theorized that the "invisible hand" would guide the economy without the need of government interference. Another Scottish philosopher, David Hume, was referred to as a geographer of human reason. Ever the skeptic, Hume stressed relying only on absolute truths like those found in mathematics as the basis for reason [source: Gay]. Founding Fathers, including Thomas Jefferson and John Adams, practiced this skeptical moderation Hume advocated.

Enlightenment ideas of social and political reformation even trickled from the French salons and English coffeehouses to some of the leaders in western Europe. Catharine the Great, empress of Russia, corresponded with the philosophes and fancied herself as enlightened. She unsuccessfully attempted to reform Russian law based on Montesquieu's "Spirit of the Laws" [source: Gay]. Frederick the Great of Prussia invited Voltaire to take up residence in the royal court, to which the philosophe accepted.

Frederick the Great had Immanuel Kant to thank for his status as an Enlightened despot. Kant hailed the freedom of the press and religious tolerance that he sponsored. The German philosopher, best known for his motto "dare to know," remains one of the most celebrated intellects from the period. A scholar of metaphysics, or the study of human existence, Kant believed that morality had to exist alongside rationality dubbed the categorical imperative [source: Johnson]. This later served as the philosophical foundation of cultural relativism.

By the late 1700s, the political situations in France and the American colonies had intensified. In France, the populace under Louis XVI and Marie Antoinette was growing uneasy from the rising debt. Across the Atlantic, the colonies in North America were jostling for independence. Enlightenment ideology would soon be put into action.