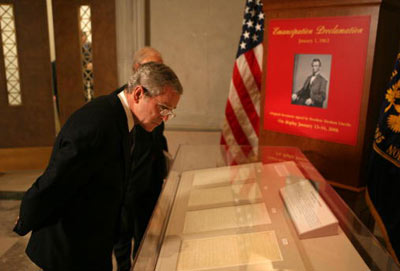 President George W. Bush looks over the Emancipation Proclamation on display at the National Archives Jan. 16, 2006, in Washington, DC. The document is rarely displayed due to its fragile condition.
Dennis Brack-Pool/Getty Images
"That on the 1st day of January, in the year of our Lord 1863, all persons held as slaves within any state or designated part of a state, the people whereof shall then be in rebellion against the United States, shall be then, thenceforward, and forever free; and the executive government of the United States, including the military and naval authority thereof, will recognize and maintain the freedom of such persons and will do no act or acts to repress such persons, or any of them, in any efforts they may make for their actual freedom.

In the first sentence, Lincoln states that he's freeing only people who are enslaved in rebel states. The rebel states considered themselves another country, so, depending on your views on the legitimacy of the Confederacy, Lincoln had about as much legal authority to free slaves in the South as he did to outlaw smoking in France.

And even if you did consider the Confederacy as Union states in rebellion, Congress had beaten Lincoln to the punch as far as freeing slaves. In August 1861, the First Confiscation Act directed Union commanders to seize "Confederate property," which included slaves. And the Second Confiscation Act in July 1862 declared that confiscated slaves "shall be free forever." So wherever the military went, slaves could be freed. Lincoln might have declared all slaves free, but if no one was there to enforce it, the Proclamation was an empty promise.

As far as constitutional amendments ending slavery, none were technically passed until after Lincoln's death. In April 1864, the U.S. Senate pushed for a constitutional amendment to abolish slavery, which Lincoln supported (it was defeated in the House of Representatives). The issue nearly cost Lincoln re-election and Republicans control of Congress. But Lincoln's dedication is an argument that not all of his anti-slavery measures were politically motivated.

But with the Proclamation, Lincoln was able to make nobody really happy. Many abolitionists thought the Proclamation should free all slaves; northern Democrats and Southerners thought Lincoln had stepped beyond his legal authority. Many people were upset that Lincoln had changed the war from a battle to preserve the Union into a fight to end slavery. Racist attitudes prevailed in both the North and South, and the idea that white troops were dying so freed slaves could invade the North and take jobs was unpopular, to put it mildly. The 1863 draft riots in New York mostly targeted blacks because of this fear, and there were plenty of reports of mob violence against Northern businesses that employed black laborers.