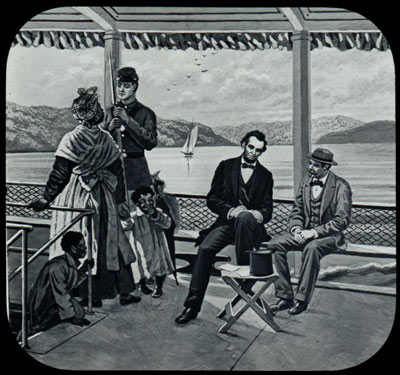 Illustration of Abraham Lincoln as he sits on a bench and writes a draft of the Emancipation Proclamation in the 1860s.
George Eastman House/Getty Images
­"Now, therefore, I, Abraham Lincoln, President of the United States, by virtue of the power in me vested as commander in chief of the Army and Navy of the United States, in time of actual armed rebellion against the authority and government of the United States, and as a fit and necessary war measure for suppressing said rebellion, do, on this 1st day of January, in the year of our Lord 1863, and in accordance with my purpose so to do, publicly proclaimed for the full period of 100 days from the day first above mentioned, order and designate as the states and parts of states wherein the people thereof, respectively, are this day in rebellion against the United States the following, to wit:

Arkansas, Texas, Louisiana (except the parishes of St. Bernard, Plaquemines, Jefferson, St. John, St. Charles, St. James, Ascension, Assumption, Terrebonne, Lafourche, St. Mary, St. Martin, and Orleans, including the city of New Orleans), Mississippi, Alabama, Florida, Georgia, South Carolina, North Carolina, and Virginia (except the forty-eight counties designated as West Virginia, and also the counties of Berkeley, Accomac, Northampton, Elizabeth City, York, Princess Anne, and Norfolk, including the cities of Norfolk and Portsmouth), and which excepted parts are for the present left precisely as if this proclamation were not issued."

This is where Lincoln tries to avoid any legal entanglements with the slavery-friendly Supreme Court. By confining his authority to commander in chief suppressing a rebellion, Lincoln prevented the Supreme Court from ruling the Emancipation Proclamation unconstitutional.

Of course, by confining it to areas of rebellion, Lincoln had to exclude areas that had been recaptured by the Union, as indicated in the second paragraph that excludes areas of Louisiana and Virginia. In fact, Lincoln left this paragraph with blanks in it until the day before it was published, waiting for word from military commanders about any new territories that could be added. By listing counties individually, Lincoln was able to avoid slaveholders' lawsuits in federal courts -- even though these same slaveholders only a few weeks earlier did not recognize the U.S. federal court system because they were part of the Confederacy.

The "forty-eight counties designated as West Virginia" is the area of Appalachian Virginia that didn't favor succession and broke free of Virginia to rejoin the Union. West Virginia voted to abolish slavery within six months of the Emancipation Proclamation.