Emancipation After the War 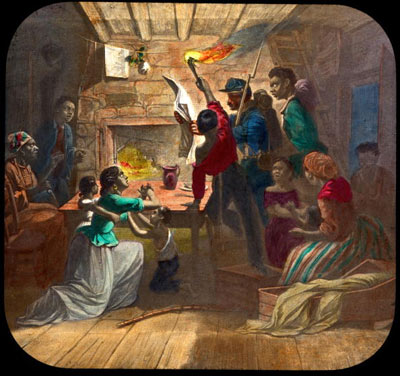 By torchlight, a Union soldier reads the Emancipation Proclamation to a room of slaves and their children.
George Eastman House/Getty Images
"And upon this act, sincerely believed to be an act of justice, warranted by the Constitution upon military necessity, I invoke the considerate judgment of mankind and the gracious favor of Almighty God.

In witness whereof, I have hereunto set my hand and caused the seal of the United States to be affixed.


Done at the City of Washington, this first day of January, in the year of our Lord one thousand eight hundred and sixty three, and of the Independence of the United States of America the eighty-seventh.


By the President: Abraham Lincoln

So Lincoln's Emancipation Proclamation didn't technically free anybody. Lincoln knew this, and he worked toward getting constitutional amendments passed to abolish slavery and guarantee citizenship for blacks. The amendments he pushed for were passed after his death, but were mostly hollow attempts at black citizenship.

After Lincoln's assassination came Andrew Johnson's administration and the rise of Radical Republicans, who wanted to punish the defeated South. Congress didn't trust Johnson -- or his promotion of Lincoln's lenient policy of welcoming the South back into the Union.