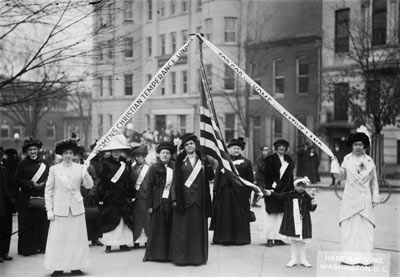 The idea of banning alcohol in the United States started to pick up steam in the 1830s, long before Prohibition was instated. Many people believed that alcohol was strongly connected to insanity, poverty and many of the world's evils, and so the temperance movement gained momentum. The number of people opposed to "demon rum" grew exponentially. Before long, thousands of societies sprouted up that were dedicated to promoting temperance. Hundreds of thousands of supporters helped spread the word, and early temperance laws began to take shape.

­In 1838, Massachusetts created a law that made it possible to buy hard liquor only in large quantities, so working-class citizens wouldn't be able to purchase it. And in 1846, Maine became the first state to pass a statewide Prohibition law. This encouraged other cities and counties to go "dry."

In the 1850s, the First Reform Era began with the intent of bringing change to certain areas of society, namely slavery. The anti-alcohol movement followed suit — at this time, Irish and German immigrants were the focus of reformers. Much of the initial successes happened in rural America, specifically the Western and Southern states. Big-city folk were not nearly as interested in giving up alcohol as those in the Bible Belt were.

The Civil War sucked some of the life out of the Prohibition cause, albeit temporarily. After the war ended, a boom in the liquor industry, which led to increased alcohol consumption, rekindled the movement's fire. A couple of major forces in the Prohibition movement were created at this time:

Wets: those opposed to Prohibition

Drys: those in favor of Prohibition

Bootlegging: the illegal manufacture, sale and transportation of alcoholic beverages

Setup: soda or ginger ale served in speakeasies. Patrons then added alcohol from a hip or thigh flask.