The Effects of Prohibition 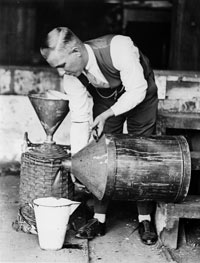 As we mentioned, Prohibition created a vast illegal market for the production, trafficking and sale of alcohol. In turn, the economy took a major hit, thanks to lost tax revenue and legal jobs.

Prohibition nearly ruined the country's brewing industry. Anheuser-Busch survived Prohibition by turning to other products, such as ice cream, root beer, malt extract and corn syrup. The city of St. Louis boasted 22 breweries before Prohibition, and a mere nine reopened after it ended.

The start of the Great Depression (1929-1939) caused a huge change in American opinion about Prohibition. Economic issues crippled the country, and it just didn't make sense to those suffering that the country couldn't profit from the legal taxation of alcohol. After all, the gangsters and bootleggers certainly seemed to benefit.

Al Capone died in 1947, but the gangster legend lives on in scores of movies, books and TV shows. "Little Caesar" was an immensely popular film about 1920s gangsters that helped spawn a heap of others. Following the movie's release in 1930, more than 50 others were put out in the next year alone. True and fictional stories from that time have yielded many other incredibly popular films, like "The Godfather," "Scarface" and "Public Enemy." And country bootleggers are often depicted as folk heroes — think "The Dukes of Hazzard."