The Pre-20th-century Roots of Satanic Panic 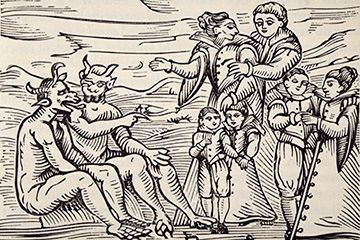 Here we see an engraving of children initiated into satanic ritual, taken from the 1608 tome "Compendium Maleficarum."
Francesco Maria Gouache/DeAgostini/Getty

If a secretive sect of devil-worshipping, child-molesting cultists never existed, then where did the idea originate?

To fully explore the answer is to take a deep, bloody dive through Western history, a deeper dive than suits the space provided here. But we can touch on some of the key pre-20th-century factors that helped define this notion of satanic cults.

For starters, let's face the realization that each of us resides within a sphere of beliefs and values. We see the world a certain way, and this worldview defines our place within the complexities of human society. We coexist with others who share our worldview and position, but the rest exist as outsiders. We divide our world between varying levels of "us" and "them."

Insiders have a long history of believing anything and everything about "them," even making the outsider a scapegoat when the need arises. As Christian theology generally focuses on a dichotomy of heaven and hell, positioning an outsider on the side of demonic supernatural forces has always been a favored tactic.

And so we've seen the likes of blood libel in the 12th century and beyond, when Christians accused Jews of using blood from kidnapped Christian children in their rituals. The 1475 Simon of Trent blood libel even saw an entire Jewish community tortured and 15 men executed over the death of a 2-year-old in Trento, Italy. Anti-Semitic violence and moral panic spread across Europe in its wake.

Consider also the witchcraft persecutions of the 15th century, in which Europeans tortured and executed innocent Europeans by the tens of thousands in the name of stamping out the threat of witches engaged in physical congress with demons [source: Laden]. As the above woodcut illustrates, there was also an inherent threat to children. Though, in dark irony, children too were tried and executed for witchcraft.

To be clear, Jews and alleged witches did not ritually murder children, but these moral panics and the written accounts that bloomed from them helped to establish the trope of the secretive, child-murdering outsider for future generations.

Such concepts as the Black Mass — a satanic mockery of Christian Mass — and the convergence of witches and demons at a Witches' Sabbat emerged from the twisted imaginations of the persecutors and the torture-derived confessions of the accused. These two concepts, along with existing traditions of ritual magic, became intermingled during the 19th century as French Romantic artists and authors became fascinated with witchcraft and Satanism [source: Jenkins] .

And so by the 1920s, the notion of historic devil-worshipping cults had found root in Western culture. But had such cults died out, or did they persist in some secretive state? We just needed additional cultural kindling to fuel the bonfire of 20th-century moral panic — and the spark of social anxiety to set it all ablaze.