The 20th-century Roots of Satanic Panic 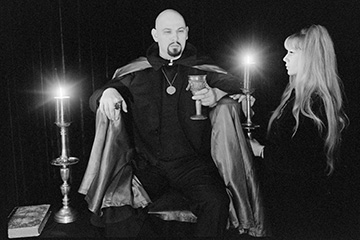 Church of Satan founder Anton LaVey indulges in a little atmospheric magic and ritual for the press on March 22, 1970.
© Bettmann/Corbis

No matter how dubious the accounts and unbelievable the supernatural details, the historical reality of blood libels and witch trials are irrefutable. The accounts and the myriad perverse descriptions and engravings exist to this day. But clearly this isn't enough. What additional cultural kindling is required to stack the wood high enough for a true inferno of moral panic?

First, let us consider the role of fiction in setting the stage. Historian Phillip Jenkins singles out Herbert Gorman's 1927 novel "The Place Called Dagon" as a key influence on the satanic panic to come. Largely forgotten today, this tale of Salem-derived devil cultists was radical and influential at the time. While pure fiction, it drew on the previous century's fascinations with witchcraft to establish satanic cultists within contemporary America. The book enthralled readers and influenced such highly influential writers as H.P. Lovecraft, Robert Bloch and Dennis Wheatley.

By the 1930s, the satanic cult had found a home in pulp fiction and grew from there. The theme became increasingly prevalent in the horror films of the 1960s, reaching more minds through the likes of the 1968 horror film "The Devil Rides Out" and the mainstream sensation of "Rosemary's Baby" the same year. From there, occult and satanic themes crept into the rock music of the 1970s and the heavy metal music to follow. It was all cool, provocative and counterculture; it also advanced the trope of the satanic cult.

But this is just the fictional kindling preceding the satanic panic. Let's now consider some of the real-life occurrences that helped pile the pyre high.

Also fueled by 19th-century occult fascinations, Aleister Crowley's Black Masses in London found traction in the media of the 1910s. Americans read about this strange, intimidating hedonist and his ritualized practices. In 1966, Anton LaVey created even more media buzz by founding the Church of Satan in San Francisco. The church's philosophy was largely one of individualism and atheism, but it also wrapped itself in the provocative theatrics of satanic rite: black robes, pentagrams, candles and nudity.

And then there were the satanic elements of real-life crime, absorbed from fiction and myth by both investigators and perpetrators. As early as the 1930s, the consideration of sacrificial cult motives worked its way into official police infestations [source: Jenkins]. The 1969 Manson Family murders provoked early suggestions of satanic motive in the media, and Richard Ramirez, a serial killer convicted in 1989, openly invoked the name of Satan in his crimes and subsequent trial. The satanic killer had become a reality.

These are just some of the elements that helped build the pyre for the coming panic. All that was needed to kick things into overdrive was an urgent threat to the children — and to ourselves.