5 Fascinating Stories of Abolitionists Past and Present

by Dave Roos
Next
Olaudah Equiano is shown on the cover of his memoir, which was a best-seller in the 1700s and one of the first written by a former African slave. Fotosearch/Getty Images

Slavery is a moral stain on humanity, and sadly one that continues even today. Thankfully there are people brave enough to hold a mirror to society's darkest sins and persistent enough to never stop fighting for freedom.

While you've likely heard of famous abolitionists like Frederick Douglass, Harriet Tubman, Nat Turner and John Brown, they weren't the only ones out there. Here are five other abolitionists you should know, including one working to abolish slavery in the 21st century.

When Olaudah Equiano was just 11 years old, he and his sister were abducted by slave traders from their village in what's now southern Nigeria. Years later, he wrote his first impressions of the kidnappers who would take him across the horrific Middle Passage to the American colonies:

"I feared I should be put to death, the white people looked and acted, as I thought, in so savage a manner; for I had never seen among any people such instances of brutal cruelty; and this not only shewn towards us blacks, but also to some of the whites themselves."

In Virginia, Equiano was sold to a Royal Navy officer who treated Equiano well, teaching the young boy to read and write and taking him along on sea voyages for the next eight years. But Equiano, like all slaves, was still property and was sold again to an English merchant in Montserrat who employed him as a deckhand, valet and barber.

Equiano never took his eyes off of freedom, though, and was able to work and trade on the side to save up 40 British pounds, the price of his freedom. Raised on the sea, he followed in his former masters' footsteps and became an explorer and merchant for the next 20 years, visiting far-flung ports like Turkey and the Arctic.

When Equiano finally settled in London, he joined the burgeoning movement to abolish slavery and became a member of the "Sons of Africa," a group of 12 free black men who lobbied for the end of the English slave trade.

In 1789, as Parliament was set to debate abolition, Equiano published his autobiography, "The Interesting Narrative of the Life of Olaudah Equiano or Gustavus Vassa, the African." The book was expressly written, as Equiano says, "to excite in your august assemblies [Parliament] a sense of compassion for the miseries which the Slave-Trade has entailed on my unfortunate countrymen."

Not only was his memoir one of the first English books written by a black African author, but it was a wildly popular best-seller and helped turn the tide of British public sentiment against slavery. Equiano died in 1797, 10 years before Britain formally outlawed the African slave trade.

Those who knew William Wilberforce during his university days would have been shocked to learn that this rich and spoiled young man with an appetite for drinking, gambling and horse racing would go on to become the moral conscience of Parliament and a tireless advocate for abolition.

Elected to Parliament at just 21 years old, Wilberforce underwent a transformative Christian awakening and fell into a close friendship with Thomas Clarkson, the influential abolitionist. Starting in 1789, Wilberforce began regularly submitting bills to Parliament calling for an end to the British slave trade. He and his Christian supporters, ridiculed as "The Saints," won few votes from lawmakers who had grown rich on the fruits of slavery.

For the next 18 long years, Wilberforce submitted bill after bill, gradually wearing down the strength of the slavery lobby even as he himself suffered from debilitating bouts of colitis. Finally, on March 25, 1807, Parliament passed the Abolition of the Slave Trade Act to shouts of jubilation.

William Wilberforce was a British politician, philanthropist and leader of the movement to abolish the slave trade.
Culture Club/Getty Images

Following that triumphant day, Wilberforce went on to work for the abolition of slavery itself in the British colonies; the Abolition of Slavery bill was finally passed just three days before his death in 1833. A movie about his life, "Amazing Grace," was released in 2006.

Today, it's taken for granted that people sell customized T-shirts, bumper stickers and mugs to support a political cause or campaign. That idea may have gotten its start in 18th-century England with the Wedgwood medallion, an abolitionist icon.

The "Am I not a Man and a Brother, medallion" was produced by Josiah Wedgwood's factory and modelled by William H. Hackwood.
Brooklyn Museum/Wikipedia

Josiah Wedgwood was already England's most successful pottery manufacturer (you may know the trademark blue-and-white Wedgwood china) when he commissioned the creation of a wearable medallion to call attention to the inhumanity of the slave trade. The ceramic medallion showed an enslaved man kneeling in chains underneath the words: "Am I not a man and a brother."

The abolitionist Thomas Clarkson wrote that the words and imagery of the medallion became a popular fashion accessory among England's enlightened upper classes. Men carried snuff boxes engraved with the icon and women wore hairpins carrying the abolitionist message.

"[A]nd thus fashion, which usually confines itself to worthless things, was seen for once in the honourable office of promoting the cause of justice, humanity, and freedom," wrote Clarkson.

In 1788, Wedgwood sent a shipment of the medallions to America, to which Benjamin Franklin, then president of the Pennsylvania Society for the Abolition of Slavery, replied, "I am persuaded [the medallion] may have an Effect equal to that of the best written Pamphlet in procuring favour to those oppressed people."

When Harriet Jacobs published her autobiography, "Incidents in the Life of a Slave Girl," in 1860, she became the first woman to write a fugitive slave narrative. Her book also sparked the first open discussion of the sexual harassment and abuse heaped upon enslaved women at the hands of their masters.

Starting when she was barely a teenager, Jacobs was hounded and harassed by her master, Dr. James Norcom, a North Carolina physician. Jacobs refused his foul advances and endured the double cruelty of Norcom's suspicious wife. In an effort to finally free herself of Norcom's unwanted attention, Jacobs began a sexual relationship with a sympathetic white lawyer, with whom she had two children. She later hid out in a tiny crawlspace in her grandmother's house for seven years, only occasionally coming out at night for exercise. She hoped that by doing this, it would make Norcom think she had escaped and induce him to sell her children to their father.

Eventually, Jacobs did escape to Philadelphia where she became involved with the abolitionist movement, giving speeches, raising funds to help other escaped slaves, and writing her book.

Jacobs' story didn't fit the mold of other fugitive slave narratives meant to pull on the sympathies of white readers. Although Jacobs wrote under the pen name "Linda Brent," she was honest about using her sexuality to get revenge on Norcom and to win her escape to Boston. To those who dared to judge her, Jacobs replied that the morality of free white northerners had no bearing on the choices of an enslaved black woman.

Slavery did not disappear with the end of the African slave trade or the emancipation of enslaved people in Great Britain and the United States. According to the International Labour Organization, a division of the United Nations, there were still 40.3 million people worldwide trapped in modern slavery as of 2016. That number is more than triple the number of people trafficked during the transatlantic slave trade (10-12 million). Most present-day slaves work as domestic servants, miners, farmers or prostitutes all over the world. And one of every four of these is a child.

Kevin Bales is a professor of contemporary slavery at the University of Nottingham and the co-founder of Free the Slaves, an international nonprofit actively rescuing people from forced labor. His organization, founded in 2000, has to date has freed more than 14,000 people from slavery and helped get more than 300 traffickers and slaveholders arrested. Bales is also the author of numerous eye-opening books on modern slavery, including "Blood and Earth" about the destructive intersection of modern slavery and climate change.

A modern-day abolitionist, Bales works tirelessly to make the world aware of this invisible plague of the global economy and teach governments and industries how to eradicate it. He also gave a great TED Talk.

"It's kind of hard to describe how powerful job satisfaction can be when you know if you put in a good week, some people have come out of slavery," he told NPR in 2016. "That in a sense is the tonic, it's the balance, it's what allows me to keep going in those areas where I see the horror, but I also see the triumph of freedom and that's just worth it."

Feminist pioneers Elizabeth Cady Stanton and Lucretia Mott not only fought bravely and passionately for the rights of women, but were dedicated abolitionists. 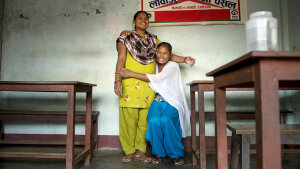 Slavery is Alive and Booming Worldwide