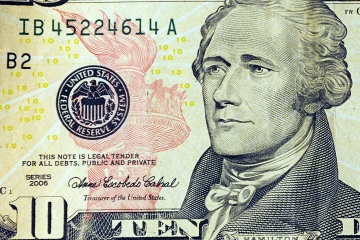 This handsome devil of a Founding Father stars on the $10 bill.
KAREN BLEIER/AFP/Getty Images

Spoiler alert: The colonies prevailed in the American Revolution, throwing off British rule to become the United States of America. OK, you probably knew that. But what you might not know is what an important role Alexander Hamilton played in the formation of the country — particularly the structure of its government.

In 1776 Hamilton joined the revolution as a captain in the Continental Army, formed his own artillery unit, and fought in the battles of Long Island, White Plains and Trenton. His service in the battle of Princeton caught George Washington's eye, and before Hamilton could hike up his breeches he found himself working alongside the commander-in-chief as Washington's aide de camp, or confidential assistant. The two shared a close relationship: Hamilton, whom Washington affectionately referred to as "my boy," advised Washington and even composed some of his correspondence and speeches [source: Maslin]. But Hamilton wasn't just a "yes man." He bemoaned the Army's lack of organization and funding, two observations that would play a big role in how he came to view the role of government [sources: PBS, Alexander Hamilton, The Gilder Lehrman Institute].

Hamilton settled into a law practice after the war, but soon his country needed him again. In 1787, delegates from across the new nation, including Hamilton, arrived in Philadelphia to improve the country's system of government under its first constitution, the Articles of Confederation. Instead, they started over, creating the Constitution that governs the United States today. What was Hamilton's contribution? Not much, at least during the drafting phase. Apparently, he missed a lot of the debates for business reasons, and even when he was there he didn't get along very well with the other delegates [sources: National Archives, PBS, Alexander Hamilton].

What he lacked in attendance, however, he more than made up for with his full-throated support for the final document. Sure, it might not have been exactly what Hamilton wanted, but remember his concerns over the lack of organization and funding of the Army? The new Constitution addressed both of these problems by strengthening the central government and giving it the power to tax. For those reasons Hamilton teamed up with fellow Constitution superfans John Jay and James Madison to write "The Federalist," a collection of 85 essays that defended the new document. Thanks in large part to Hamilton's tireless promotion, the states ultimately approved the Constitution, and Hamilton's signature on the document is a testament to his efforts [source: PBS, Alexander Hamilton].

Hamilton married Elizabeth Schuyler in 1780. The daughter of a powerful New York landholder, Schuyler was a pretty good catch for Hamilton considering he'd immigrated to the colonies as a poor Caribbean orphan not a decade earlier. As you'll see, however, their marriage was later plagued by Hamilton's very public infidelity [source: PBS, Alexander Hamilton].