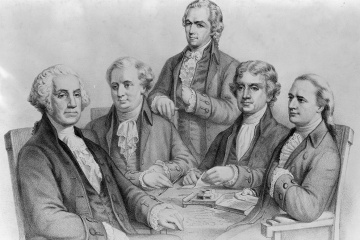 With the new Constitution in place, the United States held its first presidential election starting in December 1788. To no one's surprise, the highly popular George Washington came out on top when the final vote was tallied. He quickly set about the business of building his cabinet of advisors and, remembering his old friend's loyal service during the war, appointed Alexander Hamilton as secretary of the Treasury.

Remember, when Hamilton took charge of the Treasury in 1789 the United States' economy was nothing like it is today. It was underdeveloped and relied heavily on agriculture. Hamilton set out to change that, laying out his vision for a new economy based on four main policies: high tariffs, investment in infrastructure, consolidation of state debt under the federal government, and the creation of a central bank [source: Cohen and DeLong].

You might be wondering what all that exactly means, but it boils down to this: Hamilton wanted to create an economy that helped industry. High tariffs, or taxes on imports, for British-made products gave American businessmen a reason to invest in equipment and facilities of their own. These taxes in turn gave the government the money to improve roads, canals, ports, and other infrastructure that was crucial for trade and manufacturing [source: Cohen and DeLong].

An additional benefit of the tariff revenue was that it gave the Treasury the money it needed to back the debt states incurred during the Revolutionary War. While taking on a bunch of debt may sound like a bad move, it actually made the federal government much stronger (and remember, Hamilton was all about a strong central government). That's because the existence of a national debt allowed the government to issue bonds traded on the open marketplace, which then allowed it to borrow money at a much lower rate. Together, with the creation of a national bank — which could loan the government money, issue banknotes and provide a stabilizing force to the nation's banking system — these policies are credited with saving the fledgling country from financial ruin and setting it on a path to become an industrialized nation [source: Gordon].

When family and financial factors converged, Hamilton resigned as Treasury secretary in 1795 and returned to his law practice in New York. Still, he remained heavily involved in state and national politics with a passion that ultimately led to his demise.

Father of the Coast Guard

What does Alexander Hamilton have to do with the Coast Guard? It all started with the taxes he championed on manufactured goods from other countries. Smugglers continually tried to circumvent these tariffs, so Hamilton needed a fleet of vessels to inspect incoming cargo and enforce the law. The 10 ships Congress provided for this purpose became known as the Revenue Cutter Service, a precursor to the Coast Guard [source: United States Coast Guard].