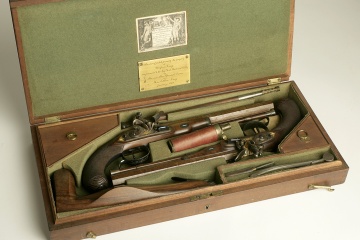 These dueling pistols belonged to politician and diplomat Rufus King, who was a signer of the Constitution and a United States senator from New York. The flintlock pistols are similar to the pair used in 1804 when Alexander Hamilton was mortally wounded.
H.W. Mortimer & Company/The New York Historical Society/Getty Images

With the deadlocked political climate in the United States today, it's nice to think of its Founding Fathers as friends who rose above petty politics to work together and create a great democracy. But that simply wasn't the case. These men spread rumors, hurled insults and fought one another's success at every turn — and Alexander Hamilton was no exception. It was this nastiness that actually killed him.

Americans have George Washington's cabinet to thank for their two-party system, though Washington himself hated the idea of political factions. Hamilton and his supporters became part of the Federalist Party, which believed in a strong central government, a country built on industry and a closer relationship with Britain. This put him in conflict with the small-government, agriculture-friendly, pro-French Republicans like fellow cabinet member Thomas Jefferson. While Hamilton left public office for good when he resigned as Treasury secretary in 1795 (aside from a short stint as inspector-general of the Army), he remained heavily involved in Federalist politics [source: PBS, Alexander Hamilton].

Hamilton broke ranks with his party in 1796 to oppose Federalist John Adams' bid to succeed Washington as president. His efforts failed, but this disdain for Adams probably cost the country's second president a second term in 1800. That's because one of the Republican candidates in that election, Aaron Burr, released a private document in which Hamilton was strongly critical of Adams. This split the Federalist Party, allowing Republicans Jefferson and Burr to finish tied for electoral votes at the top of the ballot. With the tiebreaker now up to Congress, Hamilton then threw his support behind Jefferson, who eventually won. Burr finished second, which, back in those days, meant he became vice president [source: PBS, Alexander Hamilton].

Hamilton and Burr got into it again when Burr ran for governor of New York in 1804. The former Treasury secretary made it his mission to destroy Burr, speaking out against the vice president at every opportunity. Burr lost, and upon hearing that Hamilton had expressed a "despicable opinion" of him at a dinner party, he became enraged and challenged his Federalist foe to a duel. The two faced each other at Weehawken, New Jersey, on July 11, 1804. After drawing their weapons, Hamilton reportedly fired over Burr's head to give him a moment to "pause and reflect." But Burr didn't return the gesture. Hit, Hamilton fell to the ground and died the next day [sources: PBS, Alexander Hamilton and Aaron Burr's Duel, Dunn].

While Hamilton was still the Treasury secretary, he had a little fling with a woman named Maria Reynolds. Just when Hamilton thought the affair was behind him, a political opponent published a pamphlet revealing his infidelities and connecting him with a fraudulent financial scheme perpetrated by Reynolds' husband. In order to prove that he didn't commit the crime, Hamilton was forced to release his love letters with Reynolds. It was a huge embarrassment, and some scholars think it even kept him from being president [source: Serratore].