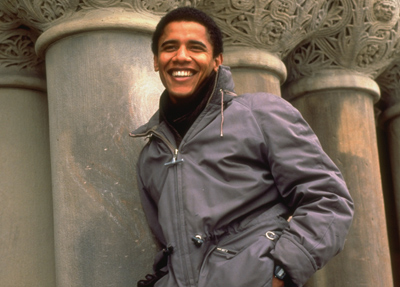 Barack Obama, shortly after he was elected the first African American president of the Harvard Law Review in 1990.
Steve Liss/Time Life Pictures/Getty Images

Barack Hussein Obama Jr. was born Aug. 4, 1961, in Honolulu. His parents, Ann Dunham, a white Kansas native and daughter of a World War II veteran, and his father, a black Kenyan and son of a goat herder, met while enrolled at the University of Hawaii. The senior Obama divorced his wife and left Hawaii for Harvard. He eventually moved back to Kenya, where he worked as an economist and oil consultant.

His mother remarried and moved young Barack to her second husband's home in Indonesia. Here, he studied for two years at a local public school. Obama's attendance at the Muslim-run public school in Indonesia later became the foundation for rumors that he is a Muslim and that the school he attended was a madrassa, a school that teaches Islam. (This doesn't appear to be the case; CNN sent reporters to the school early in 2008 and reported that the school was not a madrassa [source: New York Times].)

Obama returned to Hawaii and was raised by his grandparents until his mother returned to the United States following her divorce from Obama's stepfather. Obama attended Occidental College, a liberal arts college in Los Angeles, before transferring to Columbia University in New York. He graduated from Columbia in 1983 with a B.A. in political science.

Following his graduation from Columbia, he moved to Chicago in 1985. There, he became involved with church-based nonprofit groups that work to provide housing and support to poor families in the city [source: 60 Minutes]. He went on to Harvard Law School, where he received his Juris Doctorate in 1991 [source: Religion and Politics]. At Harvard, Obama became the first black president of the Harvard Law Review, overseeing a monthly, student-run journal that publishes about 2,000 pages per issue.

Obama married his wife, Michelle Robinson -- an earlier graduate of Harvard Law -- in 1992. The two met at a Chicago law firm where they both worked. Four years later, Obama wrote his 1996 autobiography "Dreams from My Father." In it, he revealed that during his teenage and college years he experimented with marijuana and cocaine. When Steve Kroft from "60 Minutes" asked if he regretted making these admissions, Obama told him, "No. You know, I don't". He began an earnest attempt to quit smoking cigarettes in 2007, after pledging to his wife that he would switch to nicotine gum to break his habit [source: ABC News]. In 1999, his first daughter Malia was born. His second daughter, Natasha, arrived in 2001.

In addition to practicing law, Obama also serves as a senior lecturer on law at the University of Chicago Law School [source: Chicago Sun-Times]. In addition to "Dreams from My Father," Obama also published the bestseller "The Audacity of Hope" in 2006.

In 1998, the candidate joined the United Church of Christ in Chicago, after being raised outside of religion by his mother, who he's described as a "lonely witness for secular humanism". During his 2008 presidential campaign, his religious views were called into question. An e-mail about Obama began to circulate, focusing attention on his Muslim background. The e-mail paints Obama as a radical Muslim and suggests that he may be a puppet of terrorists. This e-mail was categorically debunked as a false claim by the online urban legend reference site Snopes.com. The concept was lampooned on the controversial July 21, 2008, cover of the New Yorker magazine. A drawing entitled "The Politics of Fear" depicted a turban clad Barack giving pounds to his militantly-dressed and afroed wife, Michelle, in the Oval Office, while an American flag burns in the fireplace beneath a portrait of Osama bin Laden.

Read about Obama's political career on the next page.