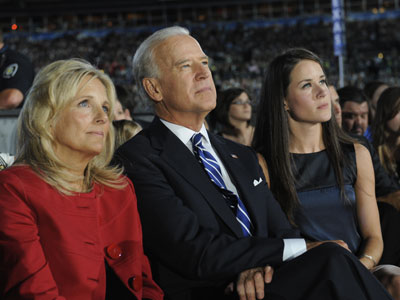 Joseph Robinette Biden Jr. was born Nov. 20, 1942, in Scranton, Penn., the son of Joe and Jean Biden [source: Biography]. He was the oldest of four in an Irish-Catholic family. His father was a businessman of varying success. Biden Sr. worked as a car salesman, a sales representative for Amoco Oil, co-owner of a crop dusting company, an executive in a marine sealant manufacturing firm, a realtor, and a boiler cleaner for a heating company [source: Chapman].

When Joe Biden was 10, his family moved to a suburb of Wilmington, Del., where he attended Archmere, a private Catholic school. He took a part-time job to help pay for the tuition. As a boy, Biden had a debilitating stutter. He stood before a mirror reciting a line from Ralph Waldo Emerson's "The American Scholar" over and over, watching the muscles in his face in order to learn how to control them [source: ABC News].

He went on to attend the University of Delaware, struggling with grades at first and finally earning a bachelor's degree in 1965. The previous year, Biden had gone to the Bahamas for spring break, where he snuck into a hotel pool and met his future wife, Neilia Hunter [source: Time]. In 1966, the couple married and Biden went back to school. He obtained his law degree from Syracuse University in 1968 and practiced law in Delaware until he first entered the U.S. Senate in 1972 [source: Time, Biden].

In 1969, Biden's first son, Joseph R. "Beau" Biden, was born. He was followed by Robert Hunter Biden in 1970 and Naomi Biden in 1971 [source: Biography]. Tragedy struck the Biden family in December 1972, when Neilia and the three Biden children were involved in an auto accident while out Christmas shopping. Neilia and Naomi were killed; Beau and Hunter were injured.

Biden received the news while at his Senate office. He says he considered suicide after suffering such a profound loss [source: ABC News]. Ultimately, he chose to live. He raised his two sons as a single parent with the help of his family, including his sister who moved in with them. And he found love again; in 1977, he married Jill Jacobs. She has a Ph.D. in education and teaches at Delaware Technical Community College. Joe and Jill Biden have a third child, in addition to Hunter and Beau: a daughter named Ashley. They also have five grandchildren [source: Obama]. Beau Biden is the Delaware attorney general and a captain in the Delaware National Guard. Hunter Biden is an attorney and former lobbyist. Ashley Biden is a social worker [source: Obama].

In addition to his career as a senator, Biden also teaches constitutional law at the University of Delaware. Despite becoming the vice-presidential nominee during the 2008 campaign, he still teaches the class. And on one occasion, he "took the red-eye out of Afghanistan to make this class," a spokesperson for the law school said [source: CBS News].

During the 2008 campaign, Sen. Biden's prior medical history became a question about his ability to lead, should he become vice president. In 1988, he suffered a brain aneurysm that nearly killed him. He had dropped out of the presidential race a few months prior (more on that on next page), when he felt what he took to be a pinched nerve and a headache. After a visit to the doctor, he was taken to emergency cranial surgery. He developed a blood clot in his lungs during recovery and suffered a second aneurysm. Biden underwent a subsequent cranial surgery the following May [source: Time]. Sen. Biden said the experience changed him; he adopted the dichotomous outlook of throwing himself into his role of senator while not sweating the small stuff. Read about Biden's political career on the next page.