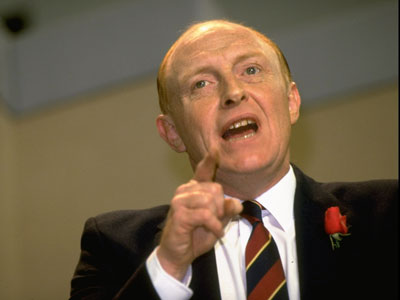 Joe Biden began his political career at the age of 27. He won a seat on the New Castle County, Del., council in 1970. Biden served on the council for two years before making the leap to the U.S. Senate. At the age of 29, Biden unseated Republican Delaware Senator James Caleb Boggs, the two-term incumbent. Biden garnered 58 percent of the vote [source: Biography]. Two weeks after winning the seat, Biden's family was involved in the auto accident that took his wife and daughter's life. He was sworn in at his sons' hospital room as the fifth-youngest senator in history [source: ABC News]. This would be the beginning of a 35-year career as a senator representing Delaware.

Biden commuted to Washington and home to Delaware each night by train to look over his two sons. The train ride was a habit he continued throughout his career as a senator, and it earned him a reputation as a Washington insider who lived outside of Washington, "an outsider inside the Beltway" [source: Washington Post].

Biden made his first run for the White House in the 1988 campaign. He ran on the promise that he would "rekindle the fire of idealism in our society" [source: NPR]. His chances looked good until New York Times columnist Maureen Dowd accused Biden of plagiarizing speeches from British Labor Party leader Neil Kinnock. Biden "became Kinnock" during one speech, lifting not only Kinnock's words, but part of his life story as well [source: Slate]. At an Iowa debate in August 1987, Biden used parts of a Kinnock speech that referenced being first in his family to attend college. The reference was true for Kinnock, but not for Biden.

Campaign managers for Biden later defended him, pointing out that Biden had used parts of Kinnock's speeches with proper attribution throughout the campaign. But the Iowa speech and an investigation that revealed he'd plagiarized one-third of a paper he wrote in law school led to the sinking of his candidacy [source: Slate]. Amid public outcry, Biden dropped out three months into the 1988 race.

Despite the controversy, he managed to keep his Senate seat. Back in Washington, and following his two aneurysms, "Biden became one of the Senate's most active and vocal members" [source: ABC News]. He became a member of the Senate Foreign Relations Committee in 1975 (currently serving as chair); following his drop out from the 1988 race, he also joined the Senate Judiciary Committee, serving as chair from 1987 to 1995 [source: Biography].

Biden's long tenure in Washington and membership on those committees gave him both remarkable power and opened him up to criticism. As chair of the Foreign Relations Committee, he gained foreign policy experience meeting with heads of state [source: NPR]. As chair of the Judiciary Committee, he met wide disapproval for his leadership during the confirmation hearings of Supreme Court justices Robert Bork and Clarence Thomas, allowing each hearing to devolve into a "circus" [source: CNS]. Biden was also examined closely for his son Hunter's activities as a lobbyist. Hunter Biden worked as a lobbyist in Washington from 2001 to 2008, when he formally resigned from his firm, two days after his father's nomination as vice president [source: USA Today, WSJ].

In 2007, Biden made a run again for the White House. He dropped out after coming in fifth in the Iowa Caucus [source: NPR]. He withheld an official endorsement of the other candidates.

Due to his interest in foreign policy and chairmanship on the Foreign Relations Committee, Sen. Biden is considered one of the United States' foremost authorities on foreign policy. That's just one key issue that's important to Biden.