by John Donovan Mar 10, 2020
King Tutankamun's royal headdress is one of the best-known works of art in the world. Its forehead includes the emblems of kingship and protection: the vulture and cobra. Print Collector/Getty Images

When famed British archaeologist Howard Carter unearthed the treasures of what is now known as dig KV62 in Egypt's Valley of the Kings in November 1922, his discovery was almost instantly recognized as a cultural, historical, scientific and — (as it turned out) — very literal gold mine. Now, almost a century later, the frenzy over Carter's find — KV62 (the letters stand for Kings' Valley) is better known as the tomb of the young Egyptian Pharaoh Tutankhamun, best known in the Western world as King Tut — has managed only to intensify.

The tomb of Tutankhamun, though modest in size compared to other Egyptian rulers, remains the main tourist draw in the Valley of the Kings. Scientists and scholars continue to piece together the mysterious story of the "Boy King's" life and death. And many of the thousands of artifacts found inside Tut's tomb are again being displayed to huge crowds in a worldwide tour, perhaps the last time they'll ever venture outside of Egypt.

"People always wonder about the great treasures of ancient Egypt," says Tarek El Awady, the curator of "King Tut: Treasures of the Golden Pharaoh," which makes a long U.S. stopover in Boston beginning in June 2020. "The surprise on their faces when they see these beautiful artifacts, the first thing [they say] is 'How? How can people make these wonderful objects?' When they see the perfection of these tiny objects, and the jewelry of the king, it's amazing. Amazing designs and amazing manufacturing. It's very sophisticated work."

The tomb of King Tut contained the gold coffin of the pharaoh, which held his mummified remains.
Print Collector/Getty Images

The Boy Behind all the Commotion

Since Carter's stunning discovery of the nearly intact tomb — something almost unheard of in Egypt, where tomb raiders had their way for centuries — Tutankhamun has been a source of fascination both for the general public and Egyptologists like El Awady.

Born around 1342 B.C.E., Tut ascended to the throne when he was only 9 years old. He is not considered by historians as a particularly influential ruler. But he did make some marks during his brief lifetime: shutting down his father's move away from polytheism and back toward the old ways, returning the royal court to Thebes, and continuing the construction of the largest religious building ever, the temple of Karnak.

Tut also famously married his half-sister (a thing, evidently, in Ancient Egypt), was unsuccessful in siring anyone to take over his throne and died, mysteriously, sometime in his teens, probably somewhere around 19. From the Rosicrucian Egyptian Museum in San Jose, California:

Apart from the transition away from monotheism, there is not a lot of documentation about King Tut's rule. He is not listed among the classic kings in the Egyptian records like his relatives. Tutankhamun only ruled for nine years and died when he was about seventeen years old. The cause of his death is not known, although there are many theories ranging from malaria to a chariot accident, however assassination has largely been ruled out.

To Egyptologists and to the simply Egypt-curious, Tut undoubtedly has found more fame after death; more than 3,000 years after his death, in fact, once Carter discovered Tut's largely hidden tomb and exposed his story (and those untold riches) to a rapt public.

The Tomb of Tutankhamun

"If we try to answer the question why people are fascinated with the treasure of Tutankhamun and the exhibition of Tutankhamun, the answer I think, first, is the amount of gold discovered in the Tomb of Tutankhamun," El Awady says. "This is, in my opinion, the first thing which captures the heart of the people: this shiny, beautiful gold."

Almost nothing in the Tomb of Tutankhamun screams riches and royalty more than the pharaoh's coffin, which the painstakingly precise Carter didn't excavate until 1924. When he did, he announced the finding of a heavy stone sarcophagus, with three coffins, each nested inside the other.

The last coffin — the one that contained the mummified remains of Tut — is a tad over 6 feet (1.8 meters long), weighs more than 240 pounds (about 110 kilograms) and is made entirely of solid gold. It is, of course, priceless. But the gold alone, at $1,500 an ounce, would be worth more than $5.8 million.

On top of the mummy's wrapped face, Carter found another priceless antiquity, perhaps the most famous and iconic piece of artwork ever crafted: the mask of Tutankhamun.

Seeing it up close is not unlike viewing the Giza pyramids or the Taj Mahal — no matter how much you've prepared yourself for the moment, the reality outstrips your expectations. Not because the object is more magnificent than you expected (although it is), but because its beauty is of a kind that feels incongruous with its history. How could something so perfect have been fashioned over 3,000 years ago?

The coffin and the mummy of Tut were first revealed to the public a few years ago. The mummy still resides at the tomb in the Valley of the Kings. Many of the more than 5,000 other artifacts found in the tomb, including Tut's mask, were transferred to the Museum of Egyptian Antiquities in Cairo (where Shaer viewed the mask in 2014) and will be displayed in the new $1 billion Grand Egyptian Museum, scheduled to open by the end of 2020.

The objects that are now making their way around the world — this is the latest (and Egypt says last) of a few worldwide exhibits through the years, including one in the late 1970s that is forever enshrined in U.S. pop culture because of a musical tribute by a certain comedian on a certain weekend night comedy show — are worthy of wow in their own right. That was evident when the Tut show stopped in Paris in 2019. Some 1.4 million people lined up to see the exhibit, reportedly the most-visited cultural exhibition in the country's history.

"The ancient Egyptians, they made sure that the kings would be well-equipped for the trip to the afterlife," El Awady explains. "We chose 150 objects from the treasure of Tutankhamun in order to introduce the whole treasure. This is the biggest exhibition of King Tut since the discovery of the tomb. This is the first time Egypt allowed this number of artifacts to travel outside Egypt. Among the 150 objects in this exhibition, we do have 60 objects travelling for the first time outside Egypt."

Egypt's antiquities chief Zahi Hawass (center) supervises the removal of the linen-wrapped mummy of King Tut from his stone sarcophagus in his underground tomb in the Valley of the Kings in November 2007.
AFP/Getty Images

Among the artifacts making the trip is one of the two wooden statues that stood at the entrance to the burial chamber in the Tomb of Tutankhamun, the so-called "guardian" statues. "The guardian statue [the other remains in Egypt] is one of the masterpieces found inside the tomb," El Awady says. "It is traveling for the first time outside of Egypt, and it is the only life-sized statue found inside the Tomb of Tutankhamun."

But everything on the trip is not big and magnificent. In fact, one of El Awady's favorite objects in the show is only about 2.7 inches (7 centimeters) tall.

"It is a small, solid golden statue of Amenhotep III," El Awady says. "Amenhotep III was the grandfather of Tutankhamun. It's a beautiful, beautiful piece of art. It represents Amenhotep III sitting on the ground, holding the royal regalia in his hand, wearing a beautiful crown.

"It's a very, very important artifact. The reason that Tutankhamun kept this object was as a memory of his grandfather and also evidence that he belonged to this great family from ancient Egypt. This small statue was very important to the king because it gave the king a sort of protection in the afterlife, protections coming from his ancestors."

The Boston exhibition, to be held at the Saunders Castle at Park Plaza, is expecting sellouts throughout its run. After that, the show heads to Australia in 2021, with additional showings after Sydney expected to include Asia and North America. After that, it's back to Egypt and a new home in the shadows of the Giza pyramids.

It promises to be a fitting final resting place for the vast treasures of Tutankhamun, a pharaoh who didn't make much of an impression in his time on Earth. In the afterlife, though, Tut rules.

NOW THAT'S INTERESTING
Through X-rays, scans and other diagnostic methods, scientists have discerned that Tutankhamun probably contracted malaria at some point, possibly broke his leg, walked with a limp because of a club foot, and very possibly dealt with various other physical ailments. The question of how he died so young, though, has yet to be answered. In 2005, after many years of speculation, researchers reported that bone fragments in Tut's skull weren't from a murderous pop to the head, but instead probably were just the result of some sloppy embalming work. So what killed Tut? It is perhaps the single most enduring mystery that still surrounds the Boy King.

What's the Difference Between a Castle and a Palace? 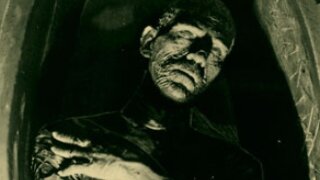 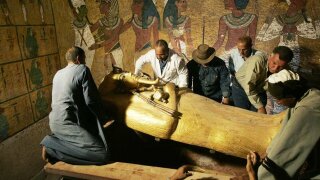 Queen Nefertiti in Secret Tomb Behind King Tut? It's Not That Simple