The Journey of Discovery 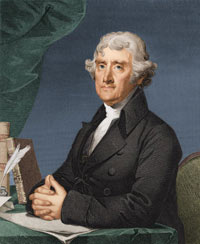 Thomas Jefferson was the brains behind the Lewis and Clark expedition.
Stock Montage/Hulton Archive/Getty Images

It was Thomas Jefferson's vision that enabled the journey of Lewis and Clark. He dreamed of discovering an all-water route through the continent to the Northwest Passage, the sea route through the Arctic Ocean that connects the Atlantic and Pacific Oceans. His prime motivation was to advance trade and settlement, and he started making preparations for an expedition as early as 1792. His strongest incentive for westward expansion came in 1802, after he heard of Alexander McKenzie's overland journey across Canada. Fearing that the British might gain control of the Western territories, Jefferson sought funding for an American expedition to the Pacific -- this, in turn, led to the Louisiana Purchase [source: University of Virginia].

On April 30, 1803, Jefferson signed the Louisiana Purchase, Treaty with France, undoubtedly the most important legacy of his presidency. He paid less than 3 cents an acre for the roughly 828,000-square-mile area, which doubled the size of the country [source: Encyclopedia Britannica]. The land stretched south from just above the Canadian border to New Orleans and the Gulf of Mexico, west to the Continental Divide in Colorado, and east to the Mississippi River. If it weren't for the Louisiana Purchase, the expedition of Lewis and Clark would not have been possible.