Life on the Lewis and Clark Expedition 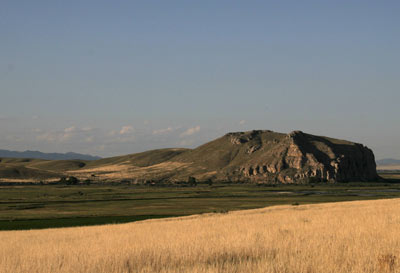 The crew carried quite a load of supplies for the trip, totaling $2,324 [source: National Geographic]. In addition to the boats -- a 55-foot Keelboat and two pirogues (small open boats) -- the Corps brought two horses (they would later trade for more), 35 oars and a broad sail. They had all the camping supplies a party of this size would need, plus their cartographical instruments. They also thought to bring gifts for the Indians they encountered -- ivory combs, pocket mirrors, tobacco, hollowed-out tomahawks that doubled as pipes, and thread, bright cloth, scissors, beads and silk ribbons. And, of course, they stocked up on medicines like quinine, opium and mercury.

Amazingly, only one member of the expedition died on the long journey. Charles Floyd succumbed to "bilious colic" [source: LewisandClark.com], probably appendicitis, shortly after the expedition set out from St. Louis. But by the time the crew reached the Rocky Mountains, many members had been stricken with dysentery, malaria, venereal diseases (most commonly syphilis, contracted from unprotected sex with Indian women) and injuries.

The conditions were not terribly difficult in and of themselves -- complaints of extremely cold winters and long rains were most often cited in journals. But because of the newness of the situation, each unfamiliar condition presented new problems. The expedition was plagued, for example, by prickly pear cacti that littered the terrain and caused foot injuries. And there were bound to be a few accidents on an 8,000-mile journey. Most famously, Pierre Cruzatte, a master boatsman, translator and fiddler who was blind in one eye and nearsighted in the other, accidentally shot Lewis while hunting in 1806. There were also a number of boating injuries, falls from traversing craggy, wet, mountainous terrain, and accidents with axes and knives. Everyone in the party was injured at some point, but none so severely they weren't able to return home.

­Of the animals that the party encountered, some proved edible, like channel catfish, steelhead trout, deer, quail, goose and elk. Others, though, were much more fearsome. The Corps documented experiences with mountain lions, coyotes, snakes, bobcats, foxes and, most famously, bears. Lewis and Clark had never before seen a grizzly bear, and it took a couple of run-ins before they learned how to best handle the beasts. On May 5, 1805, Clark recalled spotting the largest bear he'd ever seen. He'd long hunted brown bears but had never dealt with a bear that can grow to more than 8 feet tall and 900 pounds. On seeing his first grizzly (about 600 pounds), Clark noted in his journal that the animal was "verry [sic] large ­and a terrible looking animal" [source: Canadian Geographic]. It took 10 shots by two party members to kill the bear.

The Corps came across almost 50 Indian tribes on their journey, notably the Shoshone, Nez Pierce, Crow and Cheyenne [source: National Geographic]. Some proved dangerous, but without others, like the Shoshone, the travelers would have been doomed.­

You can drive Lewis and Clark's entire journey, from Pittsburgh to the Pacific and back to St. Louis. It covers more than 4,600 miles along the Missouri and Columbia Rivers and takes you through 11 states and some of America's most spectacular scenery. The National Park Service maintains the Lewis and Clark National Historic Trail.