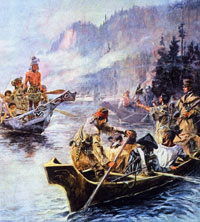 Obviously, it could be contentious to say that Lewis and Clark's team actually discovered anything, because the Indians had been familiar with the flora and fauna of the West for centuries. But Lewis and Clark did bring a vast array of plants and animals to the attention of Americans in the East. The party was able to document more than 125 varieties of animals and 178 animal species that inhabited the newly acquired land [source: National Geographic]. Some of the plants proved quite useful to the often hungry travelers. In addition to new varieties of trees, grasses and flowers, they also documented new types of tobacco, herbs like hemlock and tarragon, and the blue huckleberry, California hazelnut and Cascade grape.

Lewis and Clark weren't the first to make the North American transcontinental voyage -- Indians had most likely been doing that sort of thing for centuries. And they had also been beaten to the punch by a Canadian expedition led by Alexander Mackenzie, which completed the trip in 1793.

So what was so important about their voyage?