The Beginnings of the Spanish Inquisition 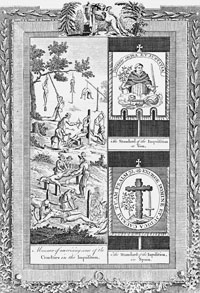 Although early Christians experienced heavy persecution, by the Middle Ages, the Catholic Church had significant religious and political power in Europe. To maintain its authority, the church suppressed heretics. The church had a very specific definition of heresy: A heretic publicly declared his beliefs (based upon what the church considered inaccurate interpretations of the Bible) and refused to denounce them, even after being corrected by the authority. He also tried to teach his beliefs to other people. He had to be doing these things by his own free will, not under the influence of the devil.

The Inquisition officially began with Pope Gregory IX (the Papal Inquisition). In 1231, he issued a bull, or decree, that set up a tribunal court system to try heretics and punish them. He chose the Dominican Order, known for being very well-educated and knowledgeable about complex theology, to conduct the Inquisition.

The Spanish Inquisition was unique in that it was established by secular rulers, King Ferdinand II and Queen Isabella, with the approval of Pope Sixtus IV. The monarchy was Catholic, and it had just united two kingdoms, Aragon and Castile, as a single country in the late 15th century. Reasons for the Inquisition included a desire to create religious unity and weaken local political authorities and familial alliances. Money was another motive -- the government made a profit by confiscating the property of those found guilty of heresy. Historians speculate that the monarchy convinced Pope Sixtus IV to allow the inquisition by threatening to remove Spanish troops from Rome, where they were needed to prevent an attack by Turkey.

Many prominent citizens were concerned about their country's religious diversity and had bigoted attitudes toward non-Catholics. Jews were subjected to violent attacks known as pogroms and isolated in ghettos. Many were killed. The Inquisition was officially established in 1478, and Jews were banished a few years later when King Ferdinand II issued the Alhambra Decree in 1492, ordering them to leave on pain of death. Many Jews converted to Catholicism. These converts were sometimes called marranos (Spanish for "pig" and a very derogatory term) and accused of secretly continuing to practice Judaism. They became targets of the Inquisition.

Spain conquered Granada, a region populated mostly by Muslim Moors, in the late 15th century. Muslims suffered opposition and persecution similar to that of the Jews, until they were banished in 1502 in the name of religious and cultural unity. Muslim converts to Catholicism, called Moriscos (Spanish for "Moorish"), were targeted for the same reasons as Jewish converts. In the late 16th century, Protestants, mainly Lutherans, also became the target of the Inquisition.

The Spanish Inquisition spread to Spanish-controlled colonies in the New World, including Mexico. Inquisition was abolished in Spain in 1834 by Queen Isabel II.

We'll look at how these inquisitorial trials were conducted next.

Waldensians and Cathars, members of spiritual movements that gained popularity and threatened the authority of the Catholic Church, were the primary targets of the Medieval Inquisition.

The Roman Inquisition, established during the 1540s, focused on the heretical crimes of witchcraft, sorcery and blasphemy. One of its most famous cases was that of Galileo Galilei.