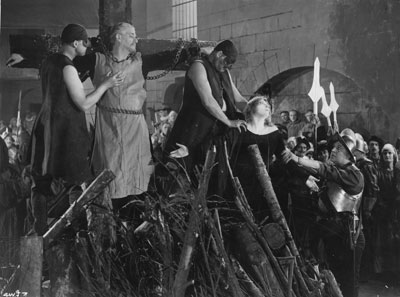 Circa 1933: British actor Matheson Lang is chained to a cross during the Spanish Inquisition in a scene from the film "The Wandering Jew."
Hulton Archive/Getty Images

As mentioned earlier, the inquisitions were tribunals -- a type of trial where the judge (or judges) tries the accused and passes judgment. But these trials were unique in several ways. The accused was required to testify, and he didn't get a lawyer or any assistance. If he refused to testify, the Inquisitor took this refusal as proof of his guilt. Anybody could testify against him, including relatives, criminals and other heretics, and he wasn't told who his accusers were. The accused usually didn't have any witnesses testify on his behalf, because they could also fall under suspicion of being a heretic. He also wasn't always immediately informed of the charges against him.

The inquisitorial court traveled the country conducting tribunals. This court consisted of two inquisitors as well as secretaries and other members. A typical inquisition began with an Edict of Grace after a Catholic Mass, in which the inquisitors explained what constituted heresy and encouraged the congregation to confess any transgressions. Those that confessed escaped torture and extreme punishment but were forced to denounce any other heretics.

Heresy could be definitively proven if the accused was caught in a heretical act, but the goal of the inquisitor was always to extract a confession, or admission of guilt. Inquisitors were not only better educated and better versed in the Bible than their subjects; they were also specifically trained in how to question them in confusing or leading ways. Often, the accused wasn't clever enough to answer the inquisitor's questions and prove his innocence. But the inquisitor still needed a satisfactory confession. Accused heretics could be imprisoned for years until one was obtained.

In 1252, Pope Innocent IV had issued a bull that allowed the use of torture to get a confession. In the 16th century, the Spanish inquisitors took advantage of this bull. This task was often assigned to local authorities, but the inquisitors themselves participated as well. If the accused confessed while being tortured, he had to confess again while not under torture for the confession to count. Torture was only supposed to be used if all other attempts at obtaining proof of heresy had been exhausted.

­We'll look at these different forms of torture next.