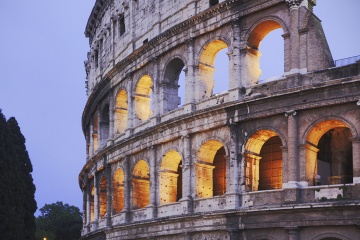 Etymology is a great thing, but sometimes are intuitions on word roots are off. Are vomitoria really what we think they are?
unknown1861/Thinkstock

Oh, the hallowed Roman vomitorium -- a disgusting symbol of the Romans' wealth and excess. When they discovered that their bellies had become too full to eat another bite, they could simply excuse themselves from the table, visit a nearby vomitorium to purge and then return to the feast. The vomitorium, far from being gross, was common in polite Roman society.

Except that it wasn't. Vomitoria did exist in ancient Rome, but (fortunately) we're all wrong about what they were used for. Turns out, a vomitorium had nothing to do with throwing up. Instead, it was a term used in the fourth century to describe passageways in public buildings that "disgorged" people in or out of a seating area. The Roman Colosseum, for example, had 76 vomitoria that functioned so efficiently a whopping 50,000 people could reach their seats in the stands within 15 minutes.

So why all the confusion? It may have started in the 1920s when a comic by English writer Aldous Huxley included a brief (and incorrect) mention of the term. Then in 1961, "The City in History" by Lewis Mumford defined a vomitorium as a room where overeaters could throw up. And, since there seemed to be few willing to argue the point, the definition stuck [source: Butler].

But if you think vomitoria are reserved only for Roman lore, think again. In some places, a vomitorium has everything to do with vomiting.

In Vietnam, the vomitorium -- in this case, a sink designed to be puked into -- is a staple in supersized beer clubs popping up all across Ho Chi Minh City. The vomitorium, most often located in a bathroom, is clearly marked with signs illustrating the sink's usage, as well as unmistakable instructions like "game over." In homage to the fictional vomitoria of ancient Rome, at least one club has larger-than-life Roman soldiers plastered to its walls [source: Godfrey].

Similar vomitorium sinks, colloquially known as "puke pans," have been employed for decades in German fraternity houses and beer establishments, as well as other areas throughout Europe [source: Antique-photos].

While the vomitorium isn't a new idea, it's easy to see why there's been so much confusion about its historical purpose. Whether "vomiting" guests out of a stadium or beer out of a fraternity member's stomach, the vomitorium has made its mark on history.