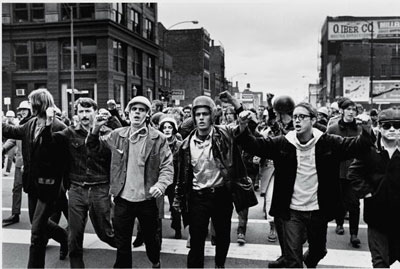 Members of the American radical group the Weathermen protest in Chicago in 1969. See more pictures of protests.
David Fenton/Getty Images

Thanks to radical groups like Germany's Red Army Faction, the Palestinian Liberation Organization, the Irish Republican Army and American-bred terrorists like the Weathermen and the Ku Klux Klan, "terrorism" became a household word in the Western world around 1950. Regardless of their political, religious or financial motives, what characterizes terrorist groups is their willingness to involve civilians in unconventional warfare. By threatening public safety, terrorists place ordinary people in the middle of a conflict -- often between the organization and the establishment it's fighting.

The history of terrorism in the United States climaxed on Sept. 11, 2001, when Muslim jihadists flew hijacked airliners into buildings in New York and Washington and into a Pennsylvania field. But America's acquaintance with terrorism began centuries before, immediately after the colonies gained independence from England and became a nation.

These terrorists operated along the North African coast -- the Barbary Coast. This region was named after two Turkish brothers who wreaked havoc on European Christians and helped establish Turkish domination of North Africa [source: Global Security]. The Spaniards nicknamed the pirate brothers "Barbarossa" Moors who'd been driven from Spain by Christians in 1492.

Almost immediately, the Mediterranean Sea, which lies between North Africa and Southern Europe, saw a vast increase in piracy, which grew in scope and magnitude through the centuries. And as the United States entered the world stage, it found that it had to deal with the terrorist threat of Barbary piracy. Like Europe, America was burdened with the demand for vast sums of money by rulers of the Barbary States of Algiers, Morocco, Tripoli and Tunis. And, like the European nations that had been dealing with the Barbary pirates for centuries, America also tried combating the issue with diplomacy and military action.

­On the next page, read about the terrorist threat that travelers, inhabitants and merchants living in and passing through the Mediterranean faced.