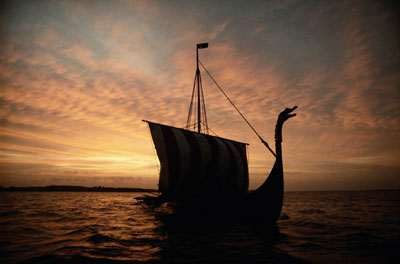 Colonizers, merchants, and ruthless raiders, the Vikings swept out of Scandinavia to terrorize Europe in swift vessels like this Danish reproduction.
Ted Spiegel/National Geographic/Getty Images

It is late m­orning at a monastery on the coast of Ireland. The year is 817. From the shore comes a cry of alarm -- dragon boats have appeared on the horizon, approaching quickly with wind filling their sails. A monk runs into the monastery to warn the others. This place holds Christian holy relics, gold, tapestries, jewels and spices. It is also home to a small herd of cattle and other livestock, plus two dozen monks and several nuns. All of these things make the monastery a magnet for the men on the dragon boats -- the Vikings.

Quickly the monks work to hide the holiest of artifacts, to mount some kind of defense, but the Vikings hit the shore with stunning speed. They wear terrifying masks and helmets of iron, bearing iron swords and wooden shields. The monks and nuns alike are slaughtered in the attack, and some of them are tortured. Everything of value is loaded into the low-slung dragon boats, including the cattle and the holy relics. The surviving men and women are captured ­as well -- they will be sold as thralls, slaves to their new Scandinavian masters. Anything built of wood is set on fire. By late afternoon, the site of the monastery is silent, the Vikings long-since gone, and nothing remains but ash.

This is the terror that swept much of Europe in the ninth through 11th centuries, the Age of Vikings. These are the Vikings as we most commonly know them, through the writings of survivors, pop-culture depictions, and even their own epic sagas -- brutal, merciless raiders striking from the northern seas. But the Vikings were more than raiders and pillagers. They were a key part of a rich Scandinavian culture that not only ravaged the shores of Europe, but settled them as well. Vikings founded Dublin, conquered Normandy, ruled more than half of England, and even discovered and settled in North America centuries before Christopher Columbus was born. They also set up profitable trade routes that reached as far as North Africa.

Today we're going to strip away the mythology and take a look the real Vikings and the culture that spawned them. We'll try to understand where they came from, what made them so bloodthirsty and what drove them to become one of the world's superpowers at the apex of their era. Then we'll explore the mythology, in all its hammer-wielding, horned-helmeted, battle-crying glory.