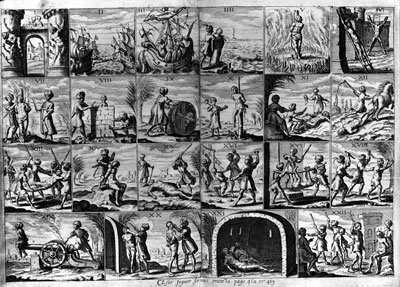 The Mediterranean Sea has served as a platform for piracy for millennia. Both Muslims and Christians have engaged in piracy, kidnapping and enslavement with the sea s­erving as a thoroughfare. But the nations along the Barbary Coast developed in earnest due to piracy. Although control over the area changed hands several times from 1492 onward, piracy was a constant source of revenue for the region.

Because of their geographic placement along the naval trade routes between Europe and the East Indies (the modern Middle East), the Barbary pirates were in an excellent position to extract wealth from Europe. These pirates were good at their trade: At one point in the 17th century, an estimated 20,000 people captured by the Barbaries were thought to be held in Algiers alone [source: Encyclopedia Britannica]. The threat of piracy was so pronounced that a system of tribute was established. European nations that traded in and beyond the Mediterranean paid the Barbary States to keep pirates from molesting their vessels and capturing their crews. This gave the Barbaries several sources of revenue: plundering ships, capturing people and accepting tribute from Europe.

The more overt extortion method of ransom was lucrative for the Barbary pirates as well. Wealthy captured travelers could pay to secure their freedom; those who couldn't pay were usually sold into slavery. This practice was widespread enough that the French Catholic Order of Mathurins began collecting alms for a fund to pay ransoms for sailors captured by the pirates from the Barbary Coast.

The Barbaries' continued success with piracy was in part due to abetment from Europe. Most large nations trading in the Indies had diplomats in the Barbary countries. These diplomats encouraged the Barbaries to plunder other countries' ships rather than those of the diplomat's home nation. During the Age of Exploration, nations largely resembled corporations, with the country's monarch acting as CEO. In many cases, like the British East India Company, actual corporations served as the financial instruments for building nations' treasuries. So the European countries were like competing companies in today's marketplace of international trade. The Barbary pirates were both a nuisance and a useful tool -- they deterred competition from smaller nations in the Mediterranean that couldn't afford to pay off the pirates or lacked diplomatic ties with the Barbaries.

The Barbaries demanded tribute from nations trading beyond the Mediterranean based on their size. Smaller states paid lesser bribes, while large, powerful nations paid more. The United States fell into the former category -- at first. But after it gained its independence, America quickly fell into the European pattern of extortion under the Barbary States. The U.S. even included $80,000 in its 1784 fiscal budget for tribute to the Barbary governments [source: Gawalt]. By 1795, when the Barbary States realized that the young nation had a significant fleet of merchant ships and a continent's worth of raw materials, the United States had to dole out around $1 million [source: Gawalt]. Because the U.S. was capable of making a disproportionately large amount of money from East Indies trade, the Barbaries' demands for tribute increased.

This posed a potentially crippling threat to American trade, but the United States, like its European counterparts, was willing to pay. The extortion ended when Thomas Jefferson was elected president. It was Jefferson who took America's first hard-line stance against the Barbary pirate states. Read about Jefferson and the pirates on the next page.