The Hair, the Horse and the Legend: Godiva's Ride 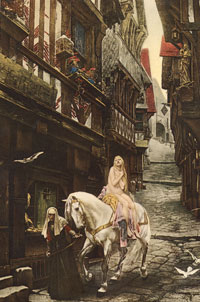 After the Norman Conquest, writers endeavored to record the lore and history of England. Their goal seemed to be quantity over quality -- the accuracy of many of these accounts is debatable, and the Lady Godiva tale is one sterling example of a pseudo-historical yarn that was woven again and again through the centuries.

As we've learned, Roger of Wendover is credited with the first instance of the Godiva legend. His monastery had been almost solely founded by Godgifu. Roger may have been trying to glorify the generous patron: In his account, the Countess Godiva is infallibly pious (Leofric is begrudgingly righteous in the end). Matthew Paris went on to paint her even more colorfully in Flores Historarium when he succeeded Roger in the late 13th century. Their versions were pretty similar, though Paris took more liberties with fleshing out the characters. In the 14th century, other historians added that the ride occurred in the morning and that the townspeople continued to pay taxes on their horses.

But in the 16th century, Grafton's "Chronicle" added a new twist to the story. He cited Gaufride as his source -- but no one is sure who Gaufride was. Scholastically speaking, this makes Grafton's version more tenuous, but it proved far more entertaining (later, it would inspire countless poems and ballads about Godiva). According to Grafton, the townspeople had been ordered to stay inside while Godiva rode through the town. One man couldn't resist sneaking a peek as she processed down the streets. As he peered through the window to the street below, a divine force intervened to strike him dead, or in some versions blind. He became known as Peeping Tom. This tension between the exhibitionist and the scopophiliac (one who finds pleasure in looking at things) was later a critical point in Sigmund Freud's theories about human psychology. For years, Lady Godiva and Peeping Tom were inextricably connected, though today we use the colloquial expression "Peeping Tom" to refer to someone -- male or female -- who looks at things he or she isn't supposed to.

By the 19th century, the Godiva legend had taken on a new meaning. The lower classes were at last able to afford private homes and came to know the luxury of personal space. People accepted that some things are better shielded from public eyes, and they began to consider Godiva as a representative of modesty. In 20th century and modern popular culture, these symbolic parts of the story started to fade away, but concrete images like the noblewoman's naked body and her long hair still resonate with people -- even if they don't know why Godiva took that naked horse ride.

So is it worse to remember history inaccurately or not remember it at all? We learned earlier that Godgifu entered into her marriage with some property in her name and that Coventry was one of those places. Since she owned Coventry, Godgifu would've made the call to lower or abolish taxes. What's more, 11th-century Coventry was a provincial parcel of farmland [source: Stephens]. There were no taxes. And the land wasn't big enough or prosperous enough to warrant a taxation system until the 12th or perhaps 13th century. Therefore, Godiva's ride never happened because there simply was no need for her to prove anything.

That hasn't stopped people from celebrating it. Beginning in 1678, a Godiva Procession was held in Coventry to commemorate and recreate the event. Maidens tapped to play the part of Godiva wore a flesh-colored body stocking and were offered free liquor by the local pubs -- liquid courage for the ride. Today, Coventry carries on the tradition. Even if it's just lore, the Lady Godiva tale is part of the town's identity.

To read more about Godgifu, alias Lady Godiva, peruse the links below.