Western History Without the Kemites 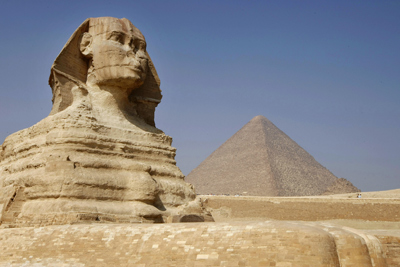 While we're still learning about the Kemites -- some recent dating places the Sphinx at 12,000 rather than 5,000 years old -- we do know that the Greeks learned from them. So why don't we learn this in school today?
Cris Bouroncle/AFP/Getty Images

When we learn of the ancient Kemites in school, we learn of their earliest exploits -- the Sphinx, the pyramids and plant cultivation. The Kemites and their achievements are relegated to the remotest past, as if their civilization had ended long before before the rise of the Greeks. But Kemet, or Egypt, along with civilizations like China and Mesopotamia (modern-day Iraq, Syria and Turkey), is one of the longest-lived cultures in the world. Having been established at least as far back as 5000 B.C., it continues to this day, despite conquests from the Persians, Greeks, and, more recently, the British.

We know much of this culture -- thanks to the myriad documents the Kemites left and our ability to translate them using the Rosetta Stone -- including that the great Greek scholars studied at the temple-universities there. For their part, the Greeks never attempted to hide where they'd learned about mathematics, astronomy and architecture. So why don't we learn about the contributions the Kemites made to the modern world in school today?

One explanation is that while the Greeks' view of the world was based on Kemetic teachings, their stress on reason ultimately led to the Age of Enlightenment, from which we draw our worldview today. To the Kemites, the physical and the spiritual were intertwined. The concept of Ma'at was as important as geometry. But after the Greeks formed their interpretation, reason eventually edged out spirituality and this view of existence was passed down. Plato, who was among the first to extol the advantages of reason over emotion in his Republic, inspired the 17th-century philosopher Rene Descartes. Descartes' observations concerning reason inspired the modern scientific method, which has fueled a strictly rational inquiry of our existence [source: McSwine].

In other words, since the Greeks were the ones who framed our worldview of using reason to investigate our world, we may feel we have no need to credit the Kemites with bestowing upon the Greeks their original education. And since the Kemites' view of the universe included a mixture of science and religion, some people today may find this philosophical mixture hokey and primitive. This is ironic, since the Kemites originated the notion of rational thought.

Read some possible reasons why the Kemites have been overlooked on the next page.