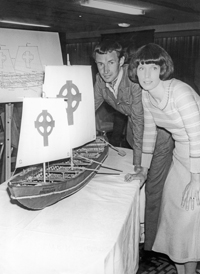 Explorer Tim Severin and his wife Dorothy beside a model of the kind of boat that a 6th century Irish monk could have used to sail to America.
Courtesy Keystone/Hulton Archive/Getty Images

Christopher Columbus gets the lion’s share of the credit for discovering America in 1492, but the evidence weighs heavily against him being the first on­e to find the New World. If Columbus had actually discovered America, he'd have found an unpopulated terrain, and of course, he didn’t. Anthropologists and archaeologists estimate that between 40 and 100 million Native Americans lived in the Americas when Columbus arrived, accounting for as much as one-fifth of the global population at the time [source: Mann]. Besides, some believe the Chinese beat Columbus by 80 years.

Caboto was beaten to North America by 500 years by the Vikings. Definitive proof of Norse habitation of Newfoundland, near Labrador, can be found at L’Anse aux Meadows, a Viking settlement dating to around 1000 C.E. The Vikings are the earliest group to leave behind tangible evidence of their presence. So were the Vikings the first? Not quite. Another group may have been the first Europeans to arrive in the New World: the Irish.

In the sixth century, St. Brendan, an Irish monk who was widely reputed as a skilled seafarer, is said to have undertaken an ambitious voyage. Brendan, along with a crew of fellow monks, sailed looking for Paradise, the Land of Promise of the Saints. After seven years exploring mysterious lands, he came upon what he believed to be the fabled paradise. It was an island so vast that he and his crew failed to reach the far shore after 40 days of walking. It contained a river that was too wide to be crossed. It was a wooded land, filled with lush fruits. He and his men filled their boats with gems they found there and returned home to tell of the news.

­It wasn’t until the ninth century that an account of Brendan's voyage surfaced, the Navigatio Sancti Brendani (“Travels of St. Brendan” in Latin). It was an instant hit, translated into several languages. The account talks of Brendan’s experiences, including his being pelted with rock from an island of fire, seeing a pillar of crystal and encountering a moving island before finally coming upon the Promised Land, which came to be referred to as the Fortunate Islands.

But as time wore on, the Navigatio -- along with St. Brendan himself -- passed into the realm of legend. If Brendan had lived -- as most scholars assume -- surely he couldn’t have traveled across the treacherous North Atlantic with the technology available at the time. Certainly, he couldn’t have beaten the Vikings to North America.

Ironically, it is Viking lore that lends support to the idea that Brendan was the first European in North America. Read the next page to find out about evidence for and against this idea. 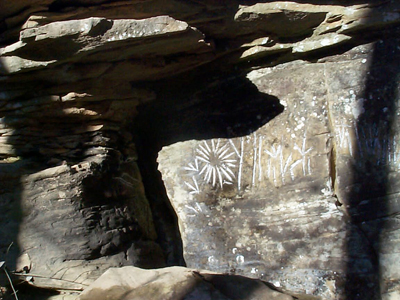