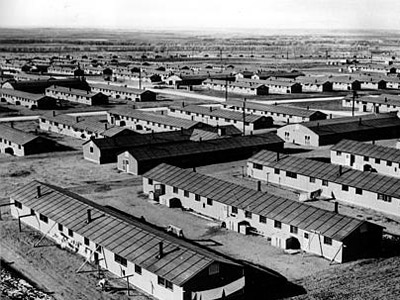 The housing barracks, built by the U.S. Army engineer corps, at the internment center where Japanese Americans are relocated in Amache, Colo., are shown on June 21, 1943.
AP Photo

Times of war are historically hostile to civil rights. Even U.S. President Abraham Lincoln -- arguably the most beloved president in history -- took liberties with the Constitution during the Civil War. For one, he suspended the writ of habeas corpus to allow prisoners to be held without trial. Historians argue whether this was justified, and even many of his supporters are willing to admit that Lincoln's actions are ethically gray. Eighty years later, another president was faced with a similarly difficult decision when the United States was pulled into war.

After the Japanese attack on Pearl Harbor in 1941, President Franklin Delano Roosevelt made the decision to relocate more than 100,000 Japanese and Japanese-Americans from their homes on the West Coast to camps around the country. Although FDR himself called them "concentration camps," we don't use that term today -- it's loaded because of its connection to the Holocaust in Nazi Germany. The American camps bore little resemblance to the concentration camps where Nazis were attempting to exterminate the Jewish race, but at the time, Americans knew little about what was really going on inside Nazi concentration camps.

Though many argue that the forced relocation of Japanese and Japanese-Americans was primarily motivated by racism, the U.S. government cited national security reasons for the sweeping relocation (although a congressional commission would later conclude otherwise, as we'll see). Nazi concentration camps were designed to extinguish the Jewish people, who the Nazis considered lesser beings, from the human race. Clearly, the use of the term "concentration camp" to describe U.S. relocation camps is misleading; for that reason, scholars prefer to call them internment camps.

Terminology aside, the relocation of Japanese and Japanese-Americans was a controversial and heavily criticized issue. Not until decades after the war did a congressional commission conclude that the relocation decision was prompted by "race prejudice, war hysteria, and a failure of political leadership" [source: Kops]. So what reasons did officials give in the 1940s for the relocation? 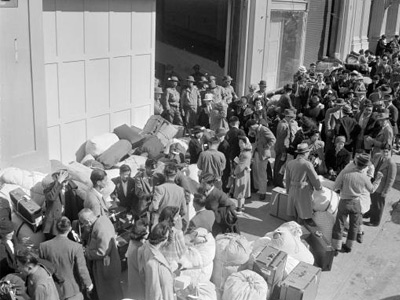 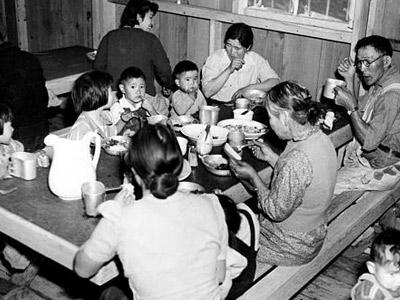 Internees ate together in a mess hall, which caused family structure to suffer when teenagers chose to eat with their friends.
AP Photo

The War Relocation Authority (WRA) set up 10 internment camps to house Japanese-Americans during the war. The camps, which were in isolated locations in California, Arizona, Colorado, Idaho, Utah, Wyoming and Arkansas, were all guarded and enclosed with barbed wire. Each camp was a self-contained community with hospitals, schools and a form of democratic self-government.

Even the WRA readily admitted that conditions within the camps were subpar. The government provided compartmentalized barracks, with one family per room. Each of these small rooms had cots and mattresses, blankets, a stove and a light. Residents used public laundry and bathroom facilities as well as a mess hall for meals. In addition to a small allowance for clothes and other personal expenditures, the wages for those who worked was low compared to outside market. To sustain a more comfortable living, many dipped into their personal savings. However, this wasn't an option for the first-generation Japanese, whose assets were frozen. They had to rely on the money they got selling personal possessions before relocation.

Although the Japanese-Americans staying in these camps tried their best to maintain the semblance of a normal life with leisurely activities like movies and baseball leagues, family life suffered a blow. For instance, during meals, the younger generation jumped at the chance to eat with their friends, and families became fractured [source: Wu]. Parents also lost some of their authority when their children began making the same salary as them [source: Sowell]. The camps offered few options for employment, all of which came with similarly low wages. As a result, life in the camps disrupted the traditional family unity and structure.

In 1943, the WRA distributed a questionnaire to all internees who were 17 or older that was designed to determine their loyalty to the United States. Among other things, it asked if the internee would renounce allegiance to the Japanese emperor. That year, those who passed the loyalty test were allowed to leave the camps for work or school.

Finally, in December 1944, Japanese-Americans were allowed to return to the West Coast, and internees were gradually allowed to leave the camps. Life couldn't immediately go back to normal for most of them, however. In many cases, the internees' property and businesses had been neglected, vandalized or taken over by others [source: Min]. The government estimated that these people's financial losses amassed to $400,000,000 (in 2009, that's roughly equal to $5,219,852,760.80) [source: Sowell].

Japanese-Americans weren't the only innocent civilians forced into internment camps during the war. In 1942, Japan invaded and occupied two Aleutian islands, Kiska and Attu. In anticipation of the attacks, the U.S. government evacuated residents of the Aleutian Islands and relocated them to camps in southeast Alaska until 1944 and 1945. These internees lived in such facilities as abandoned mines and fish canneries under deplorable conditions and poor medical care, resulting in many deaths. 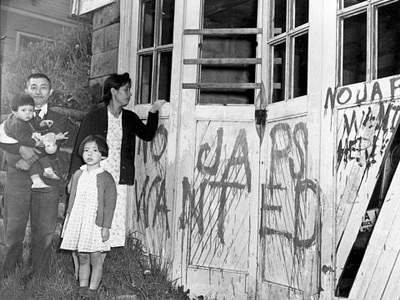