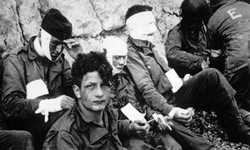 When World War II swept through Europe and pulled in all of the major powers around the globe, it left oceans of blood in its wake. Having taken approximately 50 million lives, it's said to be the bloodiest war known to history [source: Chatterjee].

The war began with German dictator Adolf Hitler's rise to power and hostile invasion of Poland in 1939. Germany, Italy, Japan and other countries made up the Axis powers. The opposing side was the Allies, which consisted of powerful nations like Britain, France, the USSR and the United States. The conflict didn't end until 1945, after the U.S. bombings of Hiroshima and Nagasaki.

When you consider that these world powers were using technologically advanced explosives and weapons built to be efficient killing machines, it comes as no surprise that the war featured some of the bloodiest battles ever. We've gathered some of the most significant battles of violent conflict, each one costing thousands -- and in some cases millions -- of lives.

As we go over each one, take note that the exact numbers of casualties (which can include not only the number of dead, but injured, sick and missing) are disputed and vary among sources. Also, the term "battle" isn't strictly defined. Some use it only to refer to shorter conflicts that take place in a confined area, while others have a looser definition that includes large-scale operations or military campaigns.

We'll start with one of the bloodiest battles in the Pacific theater.