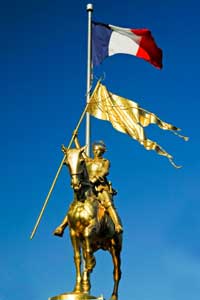 Most people can recount a rough outline of Joan of Arc's s­tory: A young French girl hears voices, l­eads troops into battle and is burned at the stake ­as a heretic. It's a legendary tale of bravery passed along since the Middle Ages. Renderings of her youthful face have rallied together nations, races, genders and movements. References to the Maid of Orléans appear in the writings of Shakespeare, Henry Longfellow, Mark Twain and George Bernard Shaw, to name a few. During World War I, U.S. Treasury Department propaganda posters urged women to buy war bonds, proclaiming "Joan of Arc Saved France." In short, Joan of Arc's legend has come to represent the ultimate example of courage, patriotism and religious devotion.

But while we often get the primary plot points of Joan's brief life correct, the ending has been botched repeatedly. True, she was burned at the stake at the age of 19, but it wasn't for heresy or witchcraft, as the story often goes. In the end, the only crime that the Inquisition tribunal could formally charge the chaste maiden with was that of wearing men's clothes. The winding logic that led the judicial panel to condemn a person to death for her sartorial choices illustrates not only the genuine military threat that Joan of Arc posed to the English, but also the extreme lengths the Catholic Church was willing go to maintain its tight control over Europe during the Inquisition.

Two major religious and political conflicts had been brewing for a while in France and the rest of Europe when Joan of Arc led the epic siege of Orléans in 1429. In 1231, Pope Gregory IX initiated the Inquisition to purge any heretics out of the Catholic Church. Two centuries later, that tribunal system of ecclesiastical courts was alive and well among the clerics in England and France.

England and France were also embroiled in the latter part of the Hundred Years War (which actually lasted 116 years). The conflict began in May 1337, when King Charles IV of France died without an heir to the throne. Intermarriage between French and English nobility incited a debate between King Edward III of England and Philip the Fair of France over who would claim the throne. In 1420, it appeared that the war might come to an end with the Treaty of Troyes, which guaranteed Henry V of England the French throne once Charles VI died. But Henry died in 1422, and Charles followed in suit two months later, rendering the treaty void -- and reigniting the military conflict. 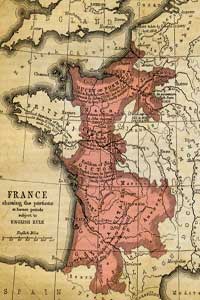 England and France fought for the French throne during the Hundred Years War.
©istockphoto/duncan1890

By 1429, the English occupied the northern French provinces of Normandy and Brittany. Burgundy, on the eastern border of France, remained independent but allied with England, effectively pressuring French forces on nearly all sides. Charles VII, the French dauphin (heir to the throne) lived in exile in the Chinon court deep in France's western territory.

At the age of 16, Joan of Arc set out to meet the exiled dauphin in Chinon. Three years earlier, she began hearing voices one day while working outdoors at her home in Domrémy in Champagne region. She identified them as belonging to St. Michael, St. Margaret and St. Catharine. At first, the trio of saints encouraged her in simple things, such as being a good daughter. But then, the messages intensified. They directed Joan to cut her hair short and don men's clothing in order to meet the dauphin and eventually lead the French to victory over the English, bringing Charles VII to the throne. Joan of Arc's father even had dreams of her surrounded by soldiers and urged her brothers to keep their sister from running away.

Joan didn't heed her father's wishes and set out for the dauphin's court with a newly cropped hairdo and an unwavering belief that she was sent by God to put the rightful king on the throne of France. Not surprisingly, the 16-year-old cross-dressing girl's arrival in Chinon didn't go unnoticed. Two days after requesting to meet with Charles, Joan of Arc was granted permission to hold court with the dauphin.

When Joan of Arc arrived to meet him, Charles intentionally hid among the crowd of nobility in the hall. Nevertheless, the 16-year-old recognized him immediately. After a brief, private conversation, Charles announced that he trusted Joan of Arc's divine mission since she was able to tell him a secret about himself that no one else could possibly know (which remains unknown to this day). To ensure that he wasn't about to hand over the fate of France to a soothsayer or witch, Charles sent Joan to be examined by a panel of clerics. They agreed with the dauphin that Joan of Arc had, indeed, heard the word of God. With that, Joan of Arc became a captain in the French military and prepared to rescue the city of Orléans from English occupation. 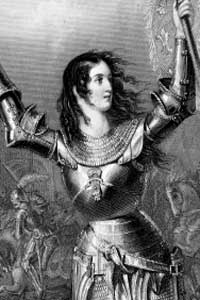 Joan of Arc led troops in the siege of Orleans.
©istockphoto/wynnter

Before heading into battle, La Pucelle, or "the Maid," as she became known to the French, needed prop­er armor and weaponry. Legend holds that when it came time to provide Joan with a sword, her attendant voices told her to look behind the altar of the church Sainte-Catherine-de-Fierbois. There, the voices said, she would find a rusted sword with five crosses engraved on it. Sure enough, the men sent to fetch the sword found it and wiped the rust off with remarkable ease. In May 1429, armed with her mystical sword, Joan of Arc led her troops to victory in Orléans after a nine-day battle. By July 17, the French had pushed the English forces into retreat in Normandy, and the dauphin was crowned Charles VII, King of France.

With England still occupying northern provinces and Burgundy unsettled, the conflict wasn't entirely resolved. In 1430, Charles VII wished to broker a truce with England to end the fighting, but Joan of Arc didn't support that plan. The following spring, Joan of Arc led a group of soldiers into the northern province of Artois, where the English had revamped their occupation [source: Chamberlin]. Outnumbered, Joan of Arc attempted to retreat but was arrested in the process. Charles VII did nothing to rescue her, and the Maid of Orléans was delivered into English captivity. She was imprisoned in the town of Rouen, the English capital in Normandy.

Instead of being treated as a prisoner of war, Joan of Arc was handed over to an Inquisition tribunal. The primary orchestrator of Joan of Arc's Inquisition trial was Pierre Cauchon, the Bishop of Beauvais. Joan had captured the Beauvais province during her military conquests, which fueled Cauchon's vendetta against her [source: Chamberlin]. He and a group of theologians at the University of Paris wished to try her for heresy. If they could successfully condemn her of that, it would discredit Charles VII's ability to rule and allow the English to claim the throne.

The preliminary heresy investigation began in January 1431. Guarded by coarse English guards, Joan of Arc grew increasingly concerned about her safety in prison. For that reason, she continued to wear men's clothing to deter any sexual advances [source: Pernoud and Clin].

Joan of Arc Condemned on a Technicality 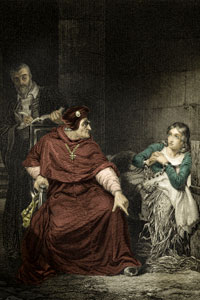 Joan of Arc was tried by an Inquisition tribunal.
©istockphoto/duncan1890

After prolonged, intensive questioning by Cauchon and the other members of the tribunal, Joan ­of Arc gave them no answers that could constitute heresy. They accused her of practicing sorcery, but she testified repeatedly that she only followed the word of God and believed in the infallibility of the Church and Pope. The clerics then proclaimed that her cross-dressing was an abomination to God, to which she answered, "the clothes are a small matter, the least of all things" [source: Pernoud and Clin]. However, Cauchon soon realized that through a technicality in canon law, the tribunal could condemn her on this small thing.

When Cauchon later asked Joan of Arc whether she would ever disobey the Church, she responded, in her usual fashion, that she only fulfilled the word of God. But the Church that Cauchon referred to was something called the Church Militant, or the Catholic Church on Earth, not the Church in heaven with God, known as the Church Triumph [source: Pernoud and Clin]. That meant if Joan of Arc didn't obey the directives of the tribunal on behalf of the Church Militant, she would technically be in disobedience of the church and a heretic.

On May 24, the tribunal convinced Joan of Arc to sign a legal document stating her submission to the Church and recanting her claims about hearing the saints' voices. Attached to that document was a cedula, or royal decree, also avowing that she would no longer wear men's clothing. Upon her renunciation, the tribunal released Joan of Arc back to prison without indicting her for any crime.

Yet, three days later in prison, Joan of Arc was again wearing men's clothes. In a later trial, some testified that guards had stolen Joan's female clothes and replaced them with male clothes. Whatever the case, as soon as Cauchon heard the news, he immediately condemned her for lapsed heresy on the grounds of cross-dressing. The same day, the tribunal handed Joan of Arc over to the secular court for her punishment: burning at the stake.

On May 30, 19-year-old Joan of Arc was taken into the public marketplace of Rouen, tied to a stake and burned alive. Based on a technicality buried within canon law, the Maid of Orléans died for the crime of cross-dressing. Twenty years later, once Charles VII had driven a majority of the English forces out of France, the verdict was nullified. In 1920, the Catholic Church canonized Joan of Arc as a saint. The last word the supposed heretic screamed before dying amid the flames was the name of Jesus.

A Short History of Napoleon, the Ambitious, Charismatic Emperor of France
Ridiculous History: When an X-wing Pilot Was Questioned After Kennedy's Assassination
Did William Tell really shoot an apple off his son’s head?