Did the Marshall Plan Really Save Europe After World War II?

Browse the article Did the Marshall Plan Really Save Europe After World War II? 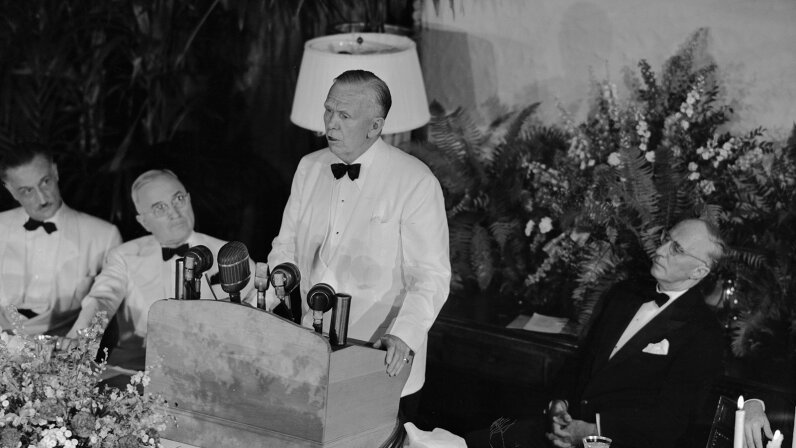 Former Secretary of State George C. Marshall speaks on the second anniversary of his address at Harvard University where he outlined the Marshall Plan. He told his audience of representatives of the Marshall Plan nations, "There is much yet to be done." President Harry Truman listens intently, left. Bettman/Getty Images

It took Secretary of State George Marshall only 12 minutes to outline a plan to save Europe after World War II, though he planned to keep his remarks even briefer. Rather than addressing Congress or the newly formed United Nations, Marshall chose a Harvard commencement speech on June 5, 1947, as his platform to unveil the U.S. State Department's strategy for reviving the flagging European economy. Emphasizing poverty relief above political conflict, Marshall spoke in simple, concrete language. Days later, officials in the United States and Europe initiated discussions about what would be recognized as the most significant foreign policy exchange in U.S. history.

World War II, which came to a close in 1945, had devastated Western Europe. A quarter of Germany's urban housing had been destroyed, combined with a 70 percent drop in gross domestic product [source: Hoover]. Industrial production across the continent was at 60 percent of prewar levels [source: Machado]. Though some nations verged on recovery, a drought followed by a brutal winter in 1946 ruined wheat harvests and intensified the scarcity of commodities. The gap between imports and exports widened, worsened by the repayments of war debt. Will Clayton, Under Secretary of Economic Affairs during the Truman administration, observed the postwar wreckage in Europe and described, "millions of people ... slowly starving" [source: Hindley].

In the face of rising malnutrition, homelessness and unemployment, Communist regimes gained popularity. By 1947, the French Communist Party held a sizeable presence in the national parliament, and Italian Communists had won comparable political influence. As relations between the United States and the Soviet Union chilled, the U.S. government feared the escalation of Communist support in response to the crumbling European economy.

Amid this tenuous international environment, George C. Marshall was slated to receive an honorary doctorate from Harvard. In a letter from Marshall to the university president, the secretary of state explained that he would say a few words of thanks at the commencement ceremony and "perhaps a little more" [source: Hindley].

Addressing a lay crowd gave Marshall more leverage. Strict isolationists in Congress might have dismissed the recovery strategy immediately, forcing him into an uphill battle. Instead, the largely conservative Harvard audience and the media in attendance applauded the plan, paving the way for its reception on Capitol Hill.

What Was the Marshall Plan? 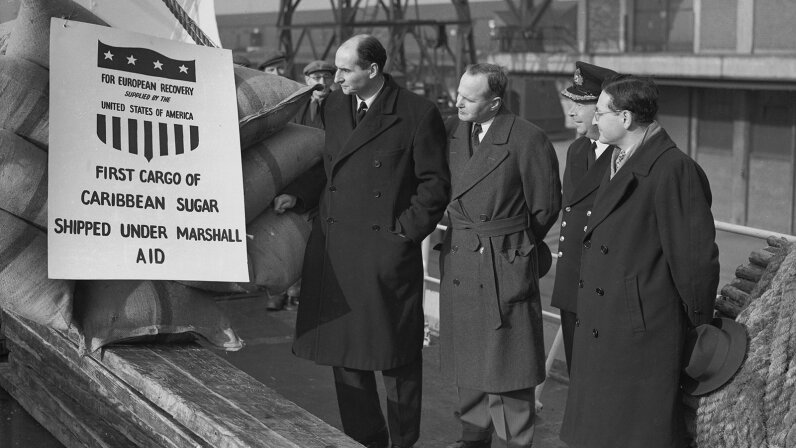 British dignitaries wait at the Royal Victoria Dock in London to welcome the first shipment of Caribbean sugar made under the Marshall Plan of U.S. aid for Europe in 1949. Edward Miller/Keystone/Getty Images

Prior to Marshall's speech, President Truman announced the Truman Doctrine in March 1947. Casting aside a former policy of nonintervention, Truman pledged U.S. support to any country resisting authoritarian rule. The president made this speech in response to the Greek government's civil war against the rising Communist Party, which the U.S. government believed had benefited from Soviet support. The fundamental foreign policy shift of the Truman Doctrine, soon followed by the Marshall Plan, coincided with the emergence of the Cold War.

The European Recovery Plan (the Marshall Plan's official title) had a publicized mission of economic salvation for Western Europe, with an intentional byproduct of Communist containment. Though the Soviet Union was initially invited to join the program, it quickly declined because of its refusal to disclose its economic and industrial assets. That exit provided the United States with a diplomatic avenue for rooting out Communism in exchange for assistance.

One of the prerequisites of the Marshall Plan was that European nations initiate the program. Rather than the United States stepping in and granting whatever amount it deemed necessary, the government left it up to European diplomats to work collectively and present a uniform request. To do so, British and French foreign ministers organized the Conference of European Economic Cooperation (CEEC) in Paris in July 1947. The CEEC, composed of 17 participating nations, initially asked the United States for $29 billion over four years. The U.S. government declined the sum, wanting greater detail on precisely how the countries would distribute and implement the grant.

While Congress haggled over the Economic Recovery Plan bill, a Soviet-backed coup erupted in the former Czechoslovakia in February 1948. That event set off Cold War alarm bells and instigated bipartisan consensus to pass the Marshall Plan into law. On April 3, 1948, President Truman signed the Economic Cooperation Act into law, approving $13 billion of monetary and export assistance over four years for participating countries. The bill also created the Economic Cooperation Agency to oversee the funding dispersal. That figure represented more than the sum of all previous foreign aid ever doled out by the United States [source: Schain]. In Europe, the Organization for European Economic Cooperation (OEEC) met the following week to hammer out the country-specific appropriations.

Countries Aided by the Marshall Plan

Effects of the Marshall Plan 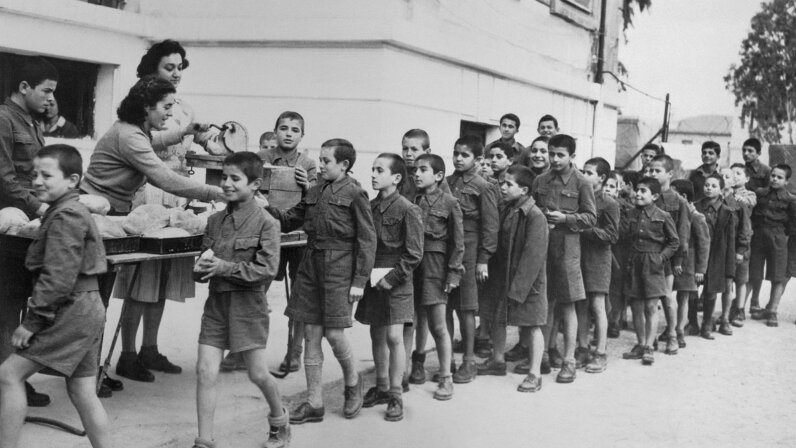 Children in Greece wait in line to get bread made with flour courtesy of the Marshall Plan. Bettman/Getty Images

The­ Marshall Plan didn't happen inside a government-insulated vacuum. While officials hurriedly sketched out their plans for the foreign funding, a vast propaganda campaign also got underway. The participating countries publicly heralded the Marshall Plan as a saving grace with posters, leaflets and other media. One such booklet distributed by the Ministry of Economic Affairs in the Netherlands contained a cartoon proclaiming "Without the Marshall Plan, your bread would be bare and so would your children," above an image of towheaded children dressed in rags [source: Library of Congress].

The sheer size of the grant demanded the American public's approval as well, and that pro-Marshall Plan message extended into the United States. The May 1948 issue of Kiplinger was devoted to taking advantage of the Marshall Plan's economic ripple effect. Certainly, U.S. industries profited from the jolt of exporting to Western Europe. After all, the lifeline wasn't just a pile of cash; it included foodstuffs, agricultural equipment and machinery. This also helped establish the United States as a longstanding trade partner and the global economic powerhouse of the second half of the 20th century.

Not surprisingly, the Soviet Union sat out of the celebratory jig over the Marshall Plan, and historians have since debated whether the plan exacerbated the Cold War tension. The Soviet Union fought back against Marshall Plan propaganda through the Communist Information Bureau, or Cominform. They also introduced a grant package called the Molotov Plan for Eastern bloc nations [source: Schaff]. Ironically, if the Soviet Union had remained involved in the Marshall Plan, the United States would've likely withdrawn its offer for economic support because it wouldn't finance a Communist government [source: Crawley].

During the Marshall Plan period, Western Europe's aggregate gross national product jumped by more than 32 percent; agricultural production rose 11 percent above the prewar level, and industrial output increased by a whopping 40 percent [source: Hogan]. This wasn't all due to the Marshall Plan: Local resources accounted for 80-90 percent of the capital formation. But what the Marshall Plan did was to provide support at a critical time.

"It facilitated essential imports, eased production bottlenecks, encouraged higher rates of capital formation, and helped to suppress inflation — all of which led to gains in productivity, to improvements in trade, and to an era of social peace and prosperity more durable than any other in Modern European history," wrote Michael J. Hogan in a 50th anniversary remembrance for the U.S. Diplomatic Mission to Germany.

The effects of the program have continued in Europe. The postwar years were the first time that Western European countries had worked as closely for mutual gain. That international cooperation demanded by the Marshall Plan laid the groundwork for the formation of the European Union (EU). In an interesting twist of economic fate, today's gross domestic product in the EU and the value of its currency exceeds that of the United States.