Was there a real John Henry? 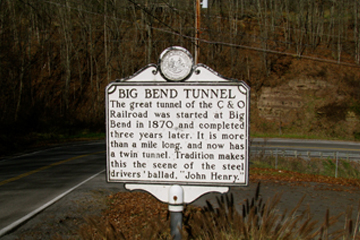 -- Anonymous, "The Ballad of John Henry"

The ballad and folktale of John Henry, the tireless railroad worker, is the stuff of American legend. The ultimate battle of man versus machine, John Henry represented the hearts of the working men who struggled to keep their jobs on the railroad as machines began moving in to do their work.

As the tale goes, John Henry was an ex-slave who went to work on the railroad as a steel-driver for the Chesapeake & Ohio (C&O) Railroad. His job was hitting steel spikes into rocks, and he was the fastest and strongest worker on the line. When the owners of the C&O decided to drill right through Big Bend Mountain in West Virginia instead of building the railroad around it, many workers lost their lives because of the dangerous work. But not John Henry. He drove spike after spike, digging his way through the mountain.

One day a salesman appeared, touting the efficiency and speed of a new steam-powered drill. The workers arranged a contest: John Henry versus the machine. When the dust settled, John Henry dug a 14-foot (4-meter) hole, but the machine made it only 9 feet (nearly 3 meters). As the rail workers celebrated, John Henry toppled over and died from exhaustion.

An amazing story of the human spirit and work ethic, yes, but was John Henry a real person? Most historians agree that he was, as thousands of African-Americans worked on the railroad, with hundreds perishing during the drilling of the Great Bend Tunnel. Their unmarked graves lie at entrance of the tunnel, at the feet of a statue of John Henry. However, opinions vary on Henry's birthplace and other details. Let's look at some of the theories.

One historian, MacEdward Leach, posits that John Henry was from Jamaica and died there working construction on the Kingston-Port Antonio Railroad between 1894 and 1896 [source: Garon]. But another historian named Scott Nelson delved deep into papers and records and came to the conclusion that Henry was from New Jersey and later ended up in prison in Virginia, where the penitentiary leased prisoners out to the railroad for daily work.

No matter who he was or where he came from, John Henry continues to endure as an American folk hero and champion of the rail workers in the late 1800s.