Did the U.S. beat the Soviet Union? 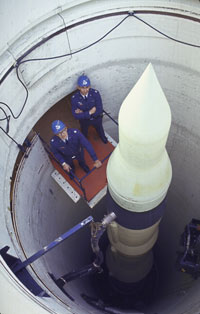 Historians who believe that the U.S. won the Cold War largely agree that American victory was guaranteed through finances. The United States bled the Soviets dry through proxy wars and the nuclear arms race. But this financial draining may not have been possible without the unprecedented stockpiling of nuclear weapons.

The world came about as close as it ever has to the brink of nuclear war between Oct. 18 and 29, 1962, during the Cuban missile crisis. The showdown over the presence of Soviet nuclear missiles in Cuba, just 90 miles south of the U.S., culminated in the USSR's humiliating withdrawal. As the world watched, American President John F. Kennedy called the Soviets' hand. While the USSR reluctantly met Kennedy's demand to remove the missiles from Cuba, it was a blow to Soviet national pride.

In response, the USSR resolved to outpace the U.S. in nuclear capabilities. This intense nuclear research and development didn't come cheap as the U.S. matched the Soviets' nuclear strides. In 1963, the United States spent 9 percent of the nation's gross domestic product on defense -- nearly $53.5 billion (that's around $362 billion in 2008 dollars) [source: UPI].

Throughout the 1960s, the U.S. continued to bolster its nuclear arsenal. However, during the '70s, the Ford and Carter administrations favored sharp criticism of Soviet policies over stockpiling nuclear arms. When President Ronald Reagan took office in 1981, he reinvigorated defense spending, matching the dollar amounts of the 1960s.

Many historians credit Reagan with dealing the death blows that ultimately brought down the Soviet Union. Perhaps the one that signaled the end for the USSR was Reagan's Strategic Defense Initiative (SDI). This uncompleted project, popularly called Star Wars, would have cost hundreds of billions of dollars. It called for the weaponization of outer space -- a shield comprised of a network of nuclear missiles and lasers in space that would intercept a Soviet first strike [source: Time]. This initiative was the pinnacle of both the space race and the arms race between the U.S. and the USSR.

Star Wars was criticized as fantasy by defense observers on both sides of the Iron Curtain (the term coined by Winston Churchill that describes the boundary in Europe between communism and the rest of the world). But Reagan was committed to the project, and the Soviet's flagging, state-owned economy simply couldn't match this escalation in defense spending.

Part of the USSR's monetary woes came from pouring funds into Afghanistan. In 1979, the Soviets invaded and occupied the country. The Truman Doctrine had clearly stipulated that American policy was to contain the spread of communism throughout the world, so the U.S. responded by secretly supporting and training the Mujahedeen (Arabic for "Strugglers"), insurgent rebels who rallied against Soviets in Afghanistan. The U.S. overwhelmingly showed support for the Mujahedeen (memorialized as freedom fighters in the 1988 film "Rambo III"), and the Soviet invasion grew protracted and expensive. Ultimately, the Afghanis defeated the USSR, and the Soviets withdrew in 1989.

But not everyone agrees the end of communism was the result of the United States' deep pockets. Some historians assert that the USSR had lived its natural life span and the U.S. was merely a witness to its death. Find out about why some people think the disbanding of the Soviet Union was a foregone conclusion on the next page.