How did the supercontinent Pangaea become seven separate continents? 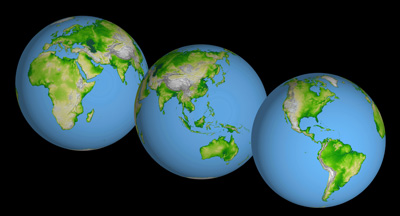 In the 1960s, the Beatles were arguably the biggest musical act the world had ever seen. Then, in 1970, John Lennon, Paul McCartney, George Harrison and Ringo Starr went their separate ways. Rumors as to why the Beatles had broken up flew fast and furious. Some said John Lennon's partner Yoko Ono had caused the rift. Others speculated that George Harrison was frustrated with his limited role, and that Paul McCartney and John Lennon wanted to move in different directions musically. It's possible that the four lads from Liverpool just drifted apart, but fans wanted to know why. Even as separate solo artists, these men were all still undeniably members of the Beatles, whether they liked it or not.

The supercontinent Pangaea works in reverse. We met the continents as solo artists. It wasn't until 1912 that meteorologist Alfred Wegener hypothesized that the seven continents had once been joined as a supercontinent. Wegener had noticed that the borders of the continent matched up and fit together, almost like a giant jigsaw puzzle. There were other clues as well -- matching rocks and fossils were found in countries separated by oceans, and tropical plant fossils were found in polar regions (and vice versa), indicating that the continents might not have always been in their current positions.

Wegener called the supercontinent Pangaea, meaning "all lands" in Greek, and he said it was bordered by Panthalassa, the universal sea. He claimed the lands separated 250 million years ago by the process of continental drift, which means the continents just slowly fractured and went their separate ways. You might, if you were musically inclined, compare this action to the name of another British band, the Rolling Stones.

But like Beatlemaniacs, who wanted a darned good reason for why there wouldn't be another Beatles album, drifting apart seemed too weak of an answer. It didn't seem possible for the continents to just move along the ocean floor. Something stronger had to be at work.

What was this planetary Yoko Ono? Did something drive a rift through the continents and force them apart? And could another supercontinent emerge, just as another supergroup emerged when George Harrison formed the Traveling Wilburys? Figuring out how the continents drifted apart will take a magical mystery tour to the ocean floor.

Although scientists agreed with Wegener that there had been a supercontinent, they disliked the reasoning behind continental drift. To really learn what was behind the breakup of Pangaea, they would need to take a yellow submarine all the way to the ocean floor.

From the 1950s to the 1970s, scientists made some important discoveries about the ocean's crust. Some of the first breakthroughs came in the field of paleomagnetism, as scientists studied the Earth's magnetic fields. The magnetic properties of rocks are classified either as normal, meaning that they have the same polarity as the current magnetic field, or as reversed, meaning that the polarity is opposite the Earth's magnetic field. This state of polarity becomes locked in when rock is formed. As scientists looked at the patterns of magnetic rock, the layers didn't quite align the way that they were supposed to, suggesting that the magnetized rock and the continents had moved. What scientists didn't know was why they had moved.

The symmetrical striping pattern of the rock provided some more clues, and so did the topography of the ocean's floor. When scientists began mapping the ocean floor, it looked a lot younger than expected. For something as old as the Earth, scientists expected to see a lot more built-up sediment. They also found oceanic mountain ranges. Paleomagnetic studies revealed that on either side of the mountain ranges, there was a symmetrical magnetic striping.

The oceanic map and the magnetic striping were explained in 1962, when a scientist named Harry Hess conceived the idea of seafloor spreading. Seafloor spreading is the process by which magma within the Earth's crust emerges at the mountain ranges and separates the sea floor. The magma creates a new section of sea floor, which explained why the oceanic crust looked so young -- it was continually emerging as a new floor. The newest rock was closest to the mountain range, with older rock located farther away, and each new layer reversed the magnetic polarity, explaining the striping.

Seismologists were also noticing at about this time that volcanic activity and earthquakes occurred near the spreading ridges and the oceanic trenches. Together this evidence suggested that though the continents were moving, the force did not come from the continents themselves, but rather from the ocean's crust. These moving slabs of earth were dubbed plates, and their movements cause many natural events, including earthquakes, volcanoes and mountain formations. The study of these plate movements came to be known as plate tectonics. The theory encapsulates both Alfred Wegener's ideas about continental drift and Harry Hess' discoveries about seafloor spreading. With a little help from his friends, Wegener's ideas about Pangaea were finally explained.

Read on to find out how the plates of Pangaea moved and whether they'll ever "come together" again. 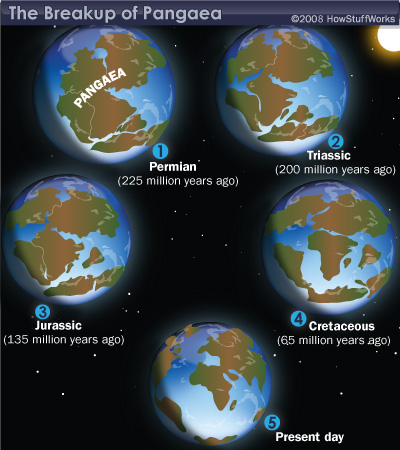 Do the continents have a Rubber Soul? Nope, the continents rest on plates made of a layer of the Earth's crust and its mantle, known collectively as the lithosphere. Plates are different sizes, with some plates more than 124 miles (200 km) thick [source: Kious]. Below the lithosphere is a fluid layer of rock called the asthenosphere. The plates are rigid slabs almost floating along in the asthenosphere, but scientists still aren't sure what causes the plates to move. They know it's somehow related to convection currents in the Earth's crust, in which hot materials rise upward as cooler materials flow downward, but they haven't figured out the precise relationship.

Scientists do know how the plates move, though.

Now that we know a little bit about how plates move, we can turn again to supercontinents. The oldest supercontinent is known as Rodinia, and it formed about 1 billion years ago [source: Encyclopædia Britannica]. The evidence for all of the supercontinents is limited because the sea floor is always regenerating itself, so Pangaea, the youngest, has the most.

Before Pangaea became a supercontinent, it existed first as separate continents. Three large continental plates came together to form what's now the Northern Hemisphere, and that landmass merged with what is now the Southern Hemisphere. Pangaea existed during the late Paleozoic and Mesozoic eras, or about 200 to 300 million years ago [source: Oreskes].

Pangaea existed for approximately 100 million years before it began to divide into the seven continents we know and love today [source: Williams, Nield]. It first broke into two large landmasses: Laurasia, which was roughly the Northern Hemisphere, and Gondwanaland, which was the Southern Hemisphere. Laurasia split into North America and Eurasia, and Gondwanaland produced Africa, Antarctica, Australia and South America, with some of the pieces rotating slightly as they separated.

The plates continue to move, with the most action these days located at the East African Rift. Some geologists think that if they keep moving, the three plates that meet at the African coastline will separate, causing the Indian Ocean to flood the area and separating the Horn of Africa from the mainland [source: Kious].

How fast does all this happen? The magnetic striping around the places where the sea floor spreads provide a way to measure the continental movement, which, in some places, nears a rate of almost 4 inches (10 centimeters) per year [source: Skinner]. The Mid-Atlantic Ridge moves less than 1 inch (2.5 centimeters) a year, so over millions of years, the Atlantic Ocean has gone from being a tiny inlet to the size we know it today [source: Kious]. Scientists like to compare the speed at which continents move to the speed at which our fingernails grow [source: Reina].

Although the movements are slow, Africa is moving toward southern Europe, and Australia and Southeast Asia will collide [source: Encyclopædia Britannica]. These are the first movements toward another supercontinent. It'll take longer than a hard day's night, though; scientists predict the continents will reconnect in another 250 million years [source: Nield].