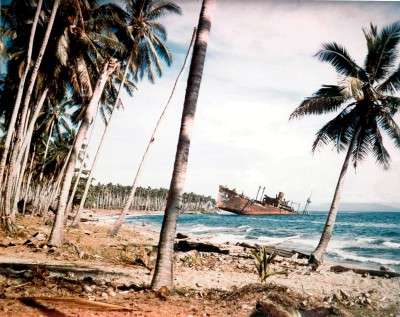 October 20: The Allies take one step closer to Nuremberg with the establishment of a commission charged with the investigation of war crimes.

October 23: A brief uprising on the threshold of an Auschwitz gas chamber results in the death of a hated SS guard and the wounding of several others. The mutineers are then shot.

October 24: For the first time, the Allies stage an air raid on Axis targets from bases in the former Axis nation of Italy.

October 29: Dockworkers on England's Thames River go on strike, forcing soldiers to pick up the slack.

The U.S. Navy heavily mines the waters off French territory in Indochina.

October 31: The Red Army has cut the supply line and isolated some 150,000 German and Romanian troops in Crimea.

November 2: The Battle of Empress Augusta Bay erupts when the U.S. Navy attacks a small Japanese fleet attempting to reinforce Bougainville, where the Marines landed the day before.

The Red Army launches an offensive across the Dnieper River in a bid to retake Kiev from the Germans.

The Nazis purge the population of the Majdanek death camp, murdering some 17,000 Jews in a single day.

November 4: The United States begins to manufacture plutonium at a facility in Oak Ridge, Tennessee.

November 6: The Red Army recaptures Kiev from the Germans with relative ease. This third-largest Soviet city has been largely reduced to a smoldering ruin.

Coastwatchers were crucial to Allied success in the Pacific. For more information on coastwatchers and other World War II news, see the headlines and images below.

U.S. sinks Japanese merchant ships in the Pacific: Its seagoing days at an end, the 7,000-ton Japanese transport Kinugawa Maru lies stranded on the Guadalcanal shore. Japan's merchant fleet was crucial for transporting raw materials to the home islands and for carrying supplies and reinforcements to the empire's far-flung outposts. As the war in the Pacific turned against Japan in 1943, U.S. planes and submarines began sinking Japanese merchant ships more quickly than they could be replaced. The mounting losses wreaked havoc on the Japanese war machine.

Aircraft carrier landings pose danger: A crewman on the USS Enterprise scrambles to help the pilot of a burning F6F Hellcat, which crashed on the flight deck during operations off Makin Island. Flying on and off the heaving carrier decks was hazardous under the best of circumstances. One miscalculation could send the plane hurtling into the crash barrier at the end of the deck, or over the side. The process was also dangerous for the deck crews, known as "deck apes," who were exposed to everything from crash landings and spinning props to loose bombs. As one seaman remarked, "every landing was a potential casualty."

Britain's RAF speaks of mythical "gremlins": Faced with unexpected and seemingly inexplicable mechanical problems during WWII, British Royal Air Force (RAF) pilots added a supernatural, gnome-like creature to world folklore: the "gremlin." Perhaps more than semi-seriously, pilots discussed gremlins, their mischievous expertise, and methods of placating and controlling them. Gremlins were said to often ride on wings, sometimes manipulating ailerons to tip the plane, but they were nothing but a myth.

Allied supreme commander General Douglas MacArthur criticized: General Douglas MacArthur was supreme commander of Allied forces in the South West Pacific Area during World War II. After commanding the futile defense of the Philippines in 1941-42, he escaped to lead the defense of Australia and later the recapture of New Guinea and the Philippines. MacArthur's personal attachment to the Philippines led him to insist on a speedy return to the islands, a course criticized by some strategists. During his southwest Pacific campaigns, MacArthur astutely bypassed heavily defended areas whenever possible, leapfrogging to strike where the enemy was weakest. He was a powerful personality -- talented but also vain, imperious, a political machinist, and a shameless publicity seeker. During his career, he gained a reputation in the public mind as a military genius -- a stature now in dispute among historians.

American planes clear the Himalayas to supply Chinese nationalists: American aircraft of the China National Aviation Corporation (CNAV) were able to fly over the Himalayas from China to India. After the Burma Road closed in 1942, such flights over "The Hump" were the only means of supplying the Chinese Nationalists. It was a 500-mile flight over 15,000-feet-high mountain ranges. In 1943 the C-46 Commando replaced the C-47 as the main carrier. More than 1,000 C-46s took the journey, usually fully loaded. They battled severe turbulence, ice, and monsoonal storms. Unarmed, they risked air attack. CNAV aircraft made some 35,000 journeys over the Hump, carrying 71,000 tons in July 1945 alone.

The Nazis continued to send thousands to death camps in 1943. See the next section for a summary of this and other wartime news from November 1943.