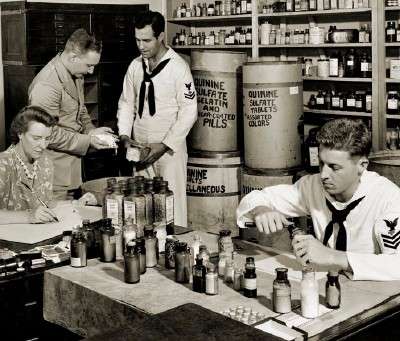 Allied successes at the close of 1943 included the British Royal Navy's sinking of Nazi Germany's Scharnhost and the U.S. Marines' capture of a strategically significant airfield in the South Pacific. The timeline below details these and other major events.

December 17: In gratitude for Chinese assistance in the Pacific Theater, President Franklin Roosevelt signs the repeal of the 1882 Chinese Exclusion Act and allows limited Chinese immigration to the United States.

December 22: One of the last remnants of the Warsaw Ghetto is wiped out when the SS murders more than 60 Jews discovered hiding in a basement in the Polish city.

December 25: Having reached a stalemate on the Italian front, the Allies agree to a plan to send an amphibious force onto the beaches south of Rome.

December 26: Only 36 of a 1,900-man crew survive the Royal Navy's sinking of Nazi Germany's Scharnhorst. This ends the German interception of Allied convoys to Murmansk, a port city in northwest Russia.

December 28: Ortona, Italy, is finally in Allied hands after two weeks of violent clashes in the streets of the small city. The battle earned Ortona the nickname "Little Stalingrad."

Realizing that the Nazi war machine is short on labor and being undone by its own brutality, Heinrich Himmler orders labor camp commandants to reduce the death rate among their inmates.

December 29: The Red Army scores a dramatic victory along the line west of Kiev, forcing some 200,000 German troops back toward Poland.

At 1943's end, World War II news included concerns about the spread of malaria and the celebration of the demise of Nazi Germany's Scharnhost. The following headlines and photos detail the war news of the day.

American troops in Africa and the South Pacific battle malaria: Civilian quinine stocks are prepared in Washington, D.C., for shipment to troops in the Pacific. The Japanese occupation of South Pacific islands had cut off Allied sources of the anti-malarial drug. In 1943 General Douglas MacArthur complained, stating, "This will be a long war if for every division I have facing the enemy, I must count on a second division in the hospital with malaria and a third division convalescing from this debilitating disease." MacArthur enforced anti-malarial measures, including mosquito netting, repellent, and the unpleasant quinine substitute, Atabrine. Even so, malaria killed thousands of U.S. troops in Africa and the South Pacific.

The logistics of ship loading explained: Crammed with everything from stretchers to Jeeps, an LST (landing ship tank) brings in materiel for the invasion of New Britain, a Pacific island. Despite the apparent clutter, Navy and Marine Corps logistics personnel transformed combat loading into an exact science. The least critical items were loaded aboard ship first, stowed deep in the holds. Priority items, such as ammunition, were loaded last so they could be made available more quickly during an assault. Special shore parties under the command of a beachmaster were responsible for unloading the ships, gathering supplies in organized dumps, and ensuring a smooth logistics flow as the battle developed.

The Allied assault on Rabaul, New Britain, begins: Marines push a Jeep ashore from an LST (landing ship tank) at Cape Gloucester, New Britain. The operation in late 1943 formed part of Operation Cartwheel, the effort to isolate the Japanese bastion at Rabaul. Located on the northeastern tip of New Britain, Rabaul was a major air, naval, and staging facility for enemy operations in New Guinea and the Solomons. General Douglas MacArthur suggested a two-pronged assault on Rabaul from eastern New Guinea and the Solomon Islands, followed by invasion. Accompanied by a bombing campaign and raids by Admiral Bull Halsey's carrier forces, the preliminary operations so effectively neutralized Rabaul that an amphibious assault proved unnecessary.

Mortar combat used in New Britain: Swampy terrain and thick rain forest severely hampered mobility at Cape Gloucester, New Britain. Fighting was often at arm's length in heavy vegetation. Weighing 87 pounds and with a range of 4,000 yards, the 81mm mortar and its smaller counterpart, the 60mm mortar, provided close support both in offense and defense. Crews had to take care that the high angle shell had a clear upward path through the heavy jungle canopy.

U.S. General Walter Krueger called a perfectionist: As commander of the Sixth Army during the war, General Walter Krueger directed 21 successful amphibious operations in the southwest Pacific, including the seizures of Leyte and Luzon in the Philippines. A former enlisted man who rose through the ranks, Krueger was a hard-driving perfectionist. No detail, down to the condition of an infantryman's feet, was too small for his attention. Though sometimes ridiculed as "Molasses in January" for his cautious approach to battle, Krueger was the general whom Douglas MacArthur singled out to lead the ground assault on Kyushu, Japan, before the atomic bomb made the operation unnecessary.

American PT boats effective in night actions: American PT boats were built of wood and only 80 feet long, but had a top speed of more than 41 knots and were heavily armed, with four Mark 8 torpedoes and a variety of automatic weapons. Crew size varied from 12 to 14. Originally designed to attack enemy warships, the radar-equipped PTs proved most effective in night actions against enemy barges and smaller vessels ferrying troops and supplies among the Pacific islands. Approximately 770 PTs were built during the course of the war.

Nazi Germany's Scharnhorst wreaks havoc for the Allies: Commissioned on January 7, 1939, the 31,000-ton German battleship Scharnhorst prowled the North Sea with its sister ship, Gneisenau, through 1939 and 1940. The ships sank the British armed merchant cruiser HMS Rawalpindi in late November 1939, covered the German invasion of Norway in spring 1940, and sank the British aircraft carrier HMS Glorious and two escorting destroyers on June 8, 1940. Repairs kept the Scharnhorst in dock through the rest of 1940, after which the sister ships broke into the Atlantic, where they sank 22 merchant ships.

No sympathy for slackers in U.S. workforce: The U.S. War Production Board flooded manufacturing plants with posters designed to instill a sense of duty in workers. An employee who was slacking off or not on the job every day, six days a week, was accused of aiding the enemy. Although the system could absorb lazy or absent individual workers, the government wanted to head off the contagion of mass absences. On this poster, an idler is said to be "working for Hitler." On others, an idle machine was described as "an empty gun" that "may cost your pal's life."

The British sink the Scharnhorst: Warned of the approach of the Scharnhorst after a German message was decoded, British ships sank the battleship on December 26, 1943, about 70 miles northeast of North Cape, Norway. Of the 1,968 men on the Scharnhorst, only 36 were rescued from the frigid sea. They were transferred to the battleship HMS Duke of York and arrived in England on January 1, 1944.

The history-making World War II events of January 1944-July 1944 set the stage for even more dramatic changes in WWII. Consult the timelines in this article for the day-to-day events and news on all fronts during the first half of 1944.

"I want to tell you from the Russian point of view," Soviet leader Joseph Stalin declared at the Tehran Conference in December 1943, "what the President and the United States have done to win the war. The most important things . . . are machines . . . . The United States . . . is a country of machines. Without the use of those machines . . . we would lose this war."

By 1943 the United States led all other countries in the production of military supplies. The success of the Allies in World War II was due not only to America's production capability, but its ability to place these materials into the hands of those who needed them most -- the soldiers on the front lines. In the end, logistics won the war.

Realizing that they would have to fight a war on two fronts thousands of miles from their mainland, America's military leaders were determined to conquer Axis nations by creating and strengthening their supply lines across the Atlantic and Pacific oceans. America's strategy against the Japanese was to gradually push westward across the Pacific, seizing one enemy base after another. The U.S. not only wanted to drive ever closer to the Japanese mainland, but also provide the logistical support (fuel, ammunition, and food) necessary to keep its ships, aircraft, and infantry moving forward. The same strategy was followed in the European Theater. Ample supplies were assembled in Africa and England before the invasions of Sicily and

While the Allies grew stronger as the war progressed, the Germans and Japanese were steadily weakened. Their war plants were bombed, their number of workers decreased, and their supply lines were gradually strangled shut. The logistical strength of the Allied nations, with America as the chief contributor, was a decisive factor in the war's outcome.