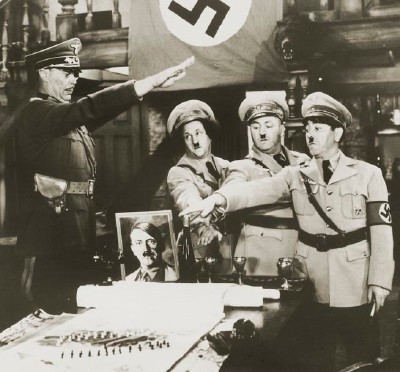 In July 1943, World War II saw the death of French Resistance leader Jean Moulin, and the largest tank battle in history. The following timeline has details of these events and more.

July 5-6: The light cruiser USS Helena is sunk in the overnight Battle of Kula Gulf. More than 150 of its sailors perish in the oil-slicked waters off the Solomon Islands.

July 7: The island of Malta, which suffered hundreds of punishing raids in the early days of the air war, receives word that Britain will grant it independence after the conclusion of hostilities.

July 8: Jean Moulin, the celebrated French Resistance leader, dies after weeks of torture at the hands of Klaus Barbie, the "Butcher of Lyon."

July 9: The U.S. Army Air Forces (USAAF) and British Royal Air Force (RAF) drop paratroopers on Sicily. However, they are mistakenly dropped in an area too far remote from their destination to fulfill their mission of securing airfields for the imminent Allied invasion.

July 12: Some 3,000 tanks clash in the Battle of Kursk, the largest tank battle in world history. Although the Soviets will lose more tanks than the Germans, they can replace them more quickly.

July 13: In a desperate bid to realign his forces, Hitler reallocates troops from the Russian front to reinforce the defense of Italy.

July 14: The Allies stage an intense bombing raid on the Sicilian city of Messina, which serves as the importation point for Axis troops and materiel.

July 15: The Japanese naval air force suffers a stunning defeat, losing 45 of 75 planes while knocking out only three U.S. aircraft in a daylight raid against the Allies in the Solomon Islands.

The headlines below show how America dealt with the war at home and include other World War II-related news from 1943.

American Kids contribute to war effort: American youngsters participated enthusiastically in wartime "victory drives," collecting scrap metal, aluminum foil, rubber, and other materials that could be reused. Some pulled their wagons from door to door collecting old tools and appliances from their neighbors. Kids also helped cultivate homegrown vegetables in community or family "victory gardens," and they took over jobs such as mixing yellow dye into the white butter substitute called oleomargarine.

The Three Stooges take on the Führer in the movies: Because Hitler struck Americans as eccentric as well as intimidating, the Führer became ripe for parody. In a 1943 comedy short called They Stooge to Conga, the Three Stooges are inept handymen who stumble into a nest of German and Japanese agents. In short order, the boys impersonate Nazis, kick a few spies in the pants, and successfully foul up an Axis scheme to direct a German U-boat into New York Harbor. Moe Howard (far right) had lampooned Hitler, and the imaginary Axis nation of Moronica, in two earlier Stooges comedies, You Nazty Spy! (1940) and I'll Never Heil Again (1941).

Bombing raids devastate Hamburg, Germany: The residents of Hamburg, Germany, had suffered through many British and American air raids since British planes began bombing runs in mid-November 1940. They were not prepared, however, for the payload that the Allies dropped on July 27-29, 1943. High-explosive and incendiary bombs dropped on those two nights unleashed firestorms that consumed nine square miles of the city in fire. The attacks killed more than 45,000 civilians and soldiers and left more than a million residents homeless.

Non-Germans join Nazi Germany's Waffen-SS: Beginning in 1942, Heinrich Himmler sought to expand the Waffen-SS by recruiting in other nations. The multinational forces, operating under German officers, included French, Danish, Flemish, Norwegian, Finnish, Dutch, and others. They even included Russians, Albanians, Hungarians, Ukrainians, and Bosnian Muslims -- all of whom the Nazis generally classed as inferior Untermenschen. As many as 30 British citizens and about five Americans joined. Some volunteers supported Nazi ideas. Others, including the Nederlanders (Dutchmen) appealed to on this poster, could escape forced labor by becoming SS members.

There were walls of flame round them now. Suddenly into the square came a fire engine drawn by two startled horses. They swerved aside, and one of the terrified children rushed down a side street. The mother followed, leaving her boy behind. As the first child reached a burning house, some blazing wood fell near her, setting her clothes alight. The mother threw herself on top of the child to try and smother the flames, but as she did so the whole top floor of the house opposite crashed down on the two of them.