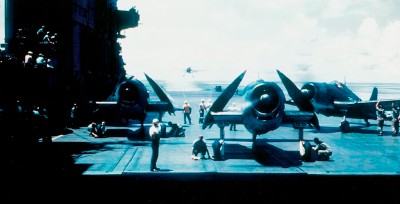 Among the important World War II events of August 1943 were an Allied victory over the Japanese at New Guinea and extensive Allied bombing of Nazi rocket factories. This timeline details these and more August 1943 events.

August 15: A 34,300-man Allied invasion force lands on Kiska, the last Japanese-occupied island in Alaska's Aleutians, only to discover it was abandoned weeks earlier.

August 16: The Nazis purge the Jewish ghetto at Bialystok, Poland, sending most of the remaining 25,000 inhabitants to the death camps at Majdanek and Treblinka.

The Americans score a major victory over the Japanese on New Guinea when they ambush the airfield at Wewak and destroy an entire bombing formation of 150 planes.

August 18: Luftwaffe chief Hans Jeschonnek kills himself in despair over the failure of the Luftwaffe to defend Nazi Germany against the Allies. The Nazi command will lie about his cause of death to conceal their concerns about the status of the Reich.

August 22: Allied forces declare Kiska secure (and uninhabited) after a weeklong sweep of the island and a few friendly-fire casualties.

August 28: Bulgaria's King Boris III dies following an audience with Hitler, leading to rampant, though unproven, speculation that he was assassinated.

August 29: Washington puts Berlin on notice, saying it has become aware of German atrocities against Poles and that the perpetrators will pay for any war crimes when the day of reckoning arrives.

Following Nazi suppression of Danish civil rights and the arrest of King Christian X, the Danes sink most of their naval fleet to prevent it from falling into Nazi hands.

Here are more World War II highlights and images from 1943.

The Grumman F6F Hellcat naval fighter plane proves potent: Despite its inelegant appearance and hasty development, the Grumman F6F Hellcat naval fighter contributed hugely to Allied victory. An improvement on the Wildcat, it proved superbly reliable and potent. Production figures reflected its effectiveness: 12,272 built from 1942, mainly in 1944 and 1945. Altogether, Hellcats destroyed some 6,000 enemy aircraft, most of which were Japanese. First sent into action in August 1943, Hellcats were usually carrier-borne and armed with six .5-inch machine guns. They could carry bombs, and ground-attack Hellcat aircraft employed rockets, notably at Iwo Jima and Okinawa. Night-fighter and reconnaissance versions also were made.

German General Kurt Student plans Benito Mussolini's rescue: German general Kurt Student, a pilot during World War I, pioneered the tactic of parachuting troops into battle. In 1940 Student's paratroops performed brilliantly in Norway, Belgium, and the Netherlands. The staggering casualties of Student's otherwise successful 1941 paratroop invasion of Crete caused Hitler to forbid any further major airborne operations. However, in 1943 Student planned a daring and successful hilltop rescue in September of the deposed and imprisoned Benito Mussolini. In 1944 his troops served as infantry in Italy, then in France after the invasion of Normandy.

Nazi Colonel Otto Skorzeny's performs daring feats: After Italian king Victor Emmanuel stripped away Mussolini's power on July 25, 1943, he placed Il Duce under arrest and imprisoned him on the island of Ponza. After Mussolini was transferred to the mountain resort of Abruzzi a few months later, Hitler sent his best agent, Colonel Otto Skorzeny, and a commando unit to Italy in September 1943 to free Mussolini. Skorzeny's exploits later in the war included kidnapping Hungarian leader Miklos Horthy to prevent him from signing an armistice with the Soviets. Skorzeny also placed German agents in American uniforms behind Allied lines during the Battle of the Bulge.

The Adolf Hitler, Benito Mussolini relationship uncovered: As he reshaped Nazi Germany's government and society in the 1930s, Hitler turned to Benito Mussolini as a mentor for implementing his Fascist reforms. The war was not very old when Hitler realized that the Italian army could not be depended on to stop the Allied advances in the Mediterranean, but that did not affect his relationship with Mussolini. The situation changed, however, when Il Duce was deposed and imprisoned in July 1943. Hitler arranged for Mussolini's rescue and installed him as head of a puppet Fascist government. However, he no longer considered Mussolini a mentor or an equal.

Vilna's resistance leader, Abba Kovner, helps Jews: In the Vilna Ghetto, Lithuanian Jews in the Fareinikte Partisaner Organizatzie (FPO; United Partisan Organization) followed poet and resistance leader Abba Kovner's motto: "Let us not go like sheep to the slaughter." When the Nazis liquidated the Vilna Ghetto in September 1943 -- transferring its residents to death camps or killing them outright -- Kovner helped FPO fighters escape into the Rudninkai Forest. For 10 months, he led the Jewish partisans in guerrilla attacks against the Nazis. Here, Kovner is pictured after the 1945 Soviet liberation of Vilna.

Civilians led to their deaths by Nazis: The Nazis spread their plans for genocide throughout each occupied country, killing Jews, political opponents, and anyone else they believed was a threat or an inferior to the Aryan race. They often took pictures to denigrate victims as they were led to their deaths. German officers showed these to their troops in order to dehumanize the victims, making it easier for them to perform their gruesome assignments.

Follow World War II history in early September 1943 by reading the timeline and headlines in the next section of this article.