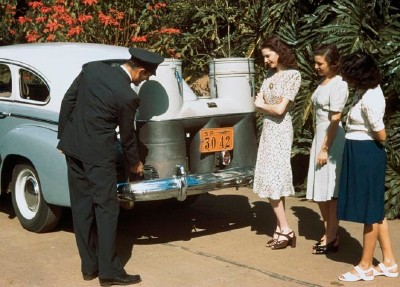 September 21: Japan leaves the central Solomon Islands to the Allies after losing 600 men in an unsuccessful bid to defend Arundel Island.

Recognizing that a two-front war is straining the Reich's resources, Joseph Goebbels suggests that Adolf Hitler agree to a separate peace with the Soviet Union, but Hitler declines.

September 23: Mussolini announces the creation of the Salò Republic, in the Axis-controlled part of Italy beyond the scope of the Badoglio administration.

September 27: German troops abandon the Italian province of Foggia, with its strategically critical airstrips, to the Allies.

October 1: The Allies occupy Naples, southern Italy's largest port city. It will become an important Allied naval and supply base.

The Nazis come up short in their effort to relocate Denmark's Jews, testimony to the character of the Danish people who have enabled their Jewish friends and neighbors to escape to Sweden. Most Danish Jews will survive the war.

Japanese troops complete their retreat from the Solomon island of Kolombangara.

October 5: Nazi Germany incorporates the Istrian Peninsula, much of the Italian Alps, and the eastern Italian city of Trieste into the Reich.

Alternative fuel sources in Europe and South America: Due to wartime fuel shortages, alternative power sources were put to use in some European and South American countries. Seen here, the chauffeur of a "charcomobile" shows Brazilian women how to light the charcoal burner that powers their car. Although the charcoal-powered car took some time to get started and had poor acceleration and speed, its fuel supply could be regenerated by a simple stop to gather combustible materials. Brazilian army trucks were fitted with both charcoal burners and gasoline tanks -- and with adjustable carburetors that could switch from one fuel to the other.

The Soviet Union's Yak fighter planes: The Yak series of fighter planes was manufactured by the Soviet Union's Yakovlev company throughout World War II. Beginning with 1940's Yak-1, Yaks were regarded as among the war's finest aircraft. The Yak-3 first saw service in 1944. Although it was manufactured in fewer numbers than the longer-range Yak-9 (which went into service in 1942, despite its higher designation number), the Yak-3 was widely favored by pilots for its strength, lightness, and maneuverability. At lower altitudes, it was considered superior to any of the Luftwaffe's sophisticated fighters.

Louis Mountbatten named Allied commander of SEAC: A great-grandson of Queen Victoria, the aristocratic Louis Mountbatten rose to military prominence during World War II as captain of the HMS Kelly and commander of the Fifth Destroyer Flotilla. He was appointed supreme Allied commander of the South East Asia Command (SEAC) in October 1943. In that post, which he held until 1946, he successfully directed international forces in the liberation of Burma and Singapore from the Japanese. After the war, Mountbatten became the last British viceroy of India, overseeing the independence of India and Pakistan from colonial rule.

Yugoslavian women fight the Axis: After the Axis powers seized Yugoslavia in 1941, Marshal Tito's Yugoslav Partisans proved themselves more capable of effective armed resistance than their rivals, the royalist Chechniks. By 1943 the Western Allies supported the Partisans over the Chechniks, despite misgivings about the Communist commitment of Tito's group. Some two million women (12 percent of Yugoslavia's prewar population) joined the Partisans in all capacities. Most of them were under 20 years of age. Many served in combat side by side with men.

The rest of October 1943 was an eventful period in World War II history. For a detailed timeline for this period, see the next section of this article.