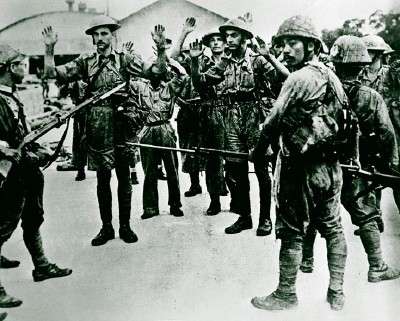 Japan's capture of the island fortress of Singapore in February 1942 shocked Britain and other European colonial powers.
Legacy Publishers

The Axis­­ continued to smash forward in World War II during the first half of 1942. On February 15, 1942, the British Empire suffered one of its most humiliating defeats. At 6:15 p.m., in a makeshift conference room in the Ford Motor Company factory in Singapore, General Arthur Percival surrendered the island to Lieutenant General Yamashita Tomoyuki.

The Japanese made the island the headquarters of the Southern Army, which conquered Southeast Asia, and renamed Singapore "Shonan," meaning "Light of the South." Of the 50,000 white troops captured, 18,000 would die of disease and/or mistreatment before war's end.

The Japanese armed forces aimed to capture a broad area in the south. They would defend the perimeter while the rich resources of the region were incorporated into the Japanese war effort.

Resistance was limited. In the Dutch East Indies, the 140,000-man colonial army was overwhelmed. The northern Philippines, with a mixed native and American fo­rce, was quickly overrun except for the Bataan Peninsula, where 100,000 soldiers and refugees were bottled up. The Japanese captured the peninsula in April.

The American headquarters in the fortress of Corregidor, in Manila Bay, fell on May 6, 1942, after a fierce defense. By early June, nearly all American forces in the Philippines had surrendered.­

Further west, a Japanese force overran Burma and entered the capital, Rangoon, on March 8. A Japanese aircraft carrier raided the northern Australian port of Darwin on February 19, and in April Japanese aircraft sank British shipping on the Indian coast.

This was the limit of Japanese expansion, though the assault had been so successful and rapid that senior commanders sought to capitalize on their advantage with further advances. In early May, a naval force sailed south to seize the southern peninsula of New Guinea while Admiral Yamamoto planned a mid-Pacific offensive. This was designed to destroy what was left of U.S. naval power in the ocean and cut off American aid to the South Pacific.

The prelude to the final Japanese assault was the seizure of Port Moresby in southern New Guinea. The task force that was dispatched south in early May was attacked by a small Allied force in the Coral Sea. The battle was a strategic setback for Yamamoto, who was obliged to abandon his plan to seize Port Moresby and isolate Australia. This was the first hint that Japanese expansion was nearing its limit.­

A month later, Yamamoto dispatched a huge task force to Midway Island, hoping to lure what was left of the U.S. Pacific Fleet to battle and then annihilate it. With a small force of carriers and sufficient secret intelligence on Japanese intentions, the Pacific Fleet commander, Admiral Chester Nimitz, planned a daring interception.

As the Japanese carrier fleet neared Midway, it was attacked by American dive-bombers. Only a few of their bombs struck, but they sank all four fleet carriers. Yamamoto ordered a return to Japan. His plans had been frustrated by America's intelligence successes, astute leadership, combat skills, and luck.

Elsewhere, the global war remained balanced on a knife edge. China's long, drawn-out conflict with Japan had become a formal state of war on December 9, 1941, following Pearl Harbor. Although the Japanese army controlled much of eastern and northern China, Chinese hit-and-run tactics made it difficult for Japan to pacify and control even those areas under occupation.

In May 1942, Japanese commanders embarked on a ruthless policy of pacification -- "kill all, steal all, burn all" -- to try to deter further Chinese resistance. Roughly 250,000 Chinese were killed in 1942.

In North Africa, British Empire forces based in Egypt had moved forward successfully across Libya against weak Italian resistance. But in January 1942, against an Axis force strengthened by a Nazi German corps under General Erwin Rommel, the British Empire Forces began a long retreat back to Egypt. Tobruk fell to the Axis on June 21, and by the end of June Axis forces were a few miles from El Alamein, Egypt, within striking distance of the Suez Canal.

The British position at sea -- in the Mediterranean and the Atlantic -- remained precarious. In 1942 they lost 7.8 million tons of shipping. Britain was able to import only one-third of what it took in before the war. The Allies' persistent bombing of Nazi German naval installations and submarine building sites achieved almost nothing.

The most dangerous situation lay in the Soviet theater. With the successful defense of Moscow in December 1941, the Soviets launched further offensives, trying to find weak spots in the Nazi German line. In the south, the Red Army created a large salient in Nazi German defensive lines south of Kharkov.

But when Joseph Stalin ordered the Red Army to capture the city in May 1942, the Nazi German front absorbed the attack and then encircled and annihilated the attackers. In the Crimea, the Nazi Germans repulsed a Soviet counteroffensive on the Kerch Peninsula. In July, they captured Sevastopol after an assault with the world's largest artillery piece: "Big Dora."

Nazi Germany's central ambition was the final defeat of the Soviet Union in 1942. Adolf Hitler planned to attack the less well-defended southern front toward the Volga River and the Caucasus oil fields. Their capture would give his forces huge new oil supplies and deny them to the enemy.

On June 28, Nazi Germany launched "Operation Blue" with substantial success. The Soviet southern front retreated. So successful was the assault that Adolf Hitler divided the force in two. He sent the Sixth Army, under General Friedrich Paulus, to seize Stalingrad and cut the Soviet Union off from the resources of the south. By August, Nazi German forces had reached the oil city of Maikop and were advancing toward the rich oil fields around Grozny.

In midsummer 1942, the war was poised in the balance. The strategic dream of the Axis powers was to link up in the Middle East. They would seize the Suez Canal and the oil that lay beyond it from one side, and they would sweep down from the Caucasus on the other side.

With Japan threatening India and the United States not yet fully armed, the ambition seemed less fantastic at the time than it now appears. Yet the summer of 1942 saw the high watermark of Axis aggrandizement. Over the next year, the Allies would find not just greater resources but also more effective ways of fighting. They were poised to reverse the long series of defeats that had until then littered their war effort.

Let's take a closer look at these events, beginning with a timeline of early January 1942 on the next page.

The War in the Pacific 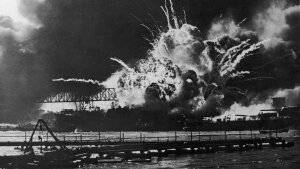