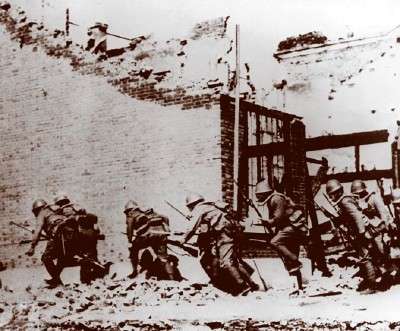 On January 2, 1942, the Philippine capital of Manila was occupied by the Japanese army. Learn about this and the other important World War II events that occurred during the month of January 1942 below.

January: In a directive that is important for troop morale, British General Claude Auchinleck reminds his Eighth Army that Erwin "Desert Fox" Rommel is an ordinary, though successful general, and not an invincible, supernatural force.

January 1: The United Nations is born from an agreement among 26 Allied nations not to make separate peace with the signatories of the Tripartite Pact.

Auto dealerships across the United States close their doors after steel conservation measures force a moratorium on new car and truck sales.

Twenty-three Czech partisans are murdered by the Nazi occupation force on suspicion of sabotage.

January 3-12: China emerges victorious in a battle for Changsha, Hunan. The Chinese drive some 70,000 Japanese troops into full retreat.

In a victory that is Britain's first against Nazi German troops in this war, the Eighth Army routs a division of Erwin Rommel's Panzer Corps, inflicting nearly 40,000 casualties.

January 10: The Japanese launch a propaganda war in the skies over the Philippines, dropping leaflets on Allied troops that press for their surrender.

January 11: Japan invades the Celebes Islands, part of the Dutch empire, and declares war on the Netherlands.

Japan continues its campaign of conquest with the seizure of the Malaysian capital of Kuala Lumpur.

Below are more highlights and images that outline the events of World War II and show the details and consequences of Japan conquering the Philippines in 1942.

British Borneo falls to Japan: Japanese infantry go on the assault in British Borneo. Mountainous and heavily jungled, with a limited network of roads, Borneo was strategically important due to its position on the main routes between Japan and Malaya. It also offered large supplies of oil and raw materials to the resource-starved Japanese (though for Japan to successfully transport oil along shipping lanes that would see increased Allied activity would be difficult).

For the moment, though, the possibility of Japanese access to additional oil was unappealing to the Allies. British strategists had long realized that Borneo could not be held. Nevertheless, the only Allied ground unit on Borneo, an outnumbered Indian battalion of the 15th Punjab Regiment, managed to resist for 10 weeks before it was overwhelmed.

The Battle of Changsha, China: A Chinese soldier mans a light machine gun during the Battle of Changsha. The Japanese offensive against the city began with 120,000 troops in late December 1941. The Chinese army resisted with 300,000 men, which harassed the Japanese advance and then established lines of defense in Changsha itself.

The Japanese assault penetrated the city, but on January 1 the Chinese counterattacked, inflicting heavy casualties. Other Chinese units swept down from the mountains to sever Japanese supply lines. Suddenly finding themselves besieged, the Japanese began a costly retreat, finally reaching the safety of the Sinchiang River on January 15.

Brazil linked to Nazi Germany: The United States had deep concerns about Brazilian policy in the years prior to World War II. Enamored of the Nazi German model, Brazilian dictator Getúlio Vargas had dissolved Brazil's constitutional government in 1937 and strengthened trade links with Nazi Germany, creating alarm in U.S. political circles. Vargas cleverly played upon those fears to win economic concessions from the U.S. In 1942 Brazil finally came into the war on the Allied side. However, enemy agents and the large German population in South America provided pro-Axis pressure and cover for Axis communication facilities well into 1944.

See the next section for a timeline and more headlines from January 1942.

At the outbreak of the Pacific war, the Japanese armed forces combined modern technology -- including ships and aircraft equal to or superior to their Allied equivalents -- with a military spirit that remained feudal. Termed Bushido (The Way of the Warrior), that spirit gave rise to behavior that Allied soldiers found bewildering as well as barbarous and fanatical.

Based on peculiar perspectives on Confucianism and Zen Buddhism, Bushido demanded unquestioning loyalty and sacrifice. The Japanese soldiers' written code ordered them to keep in mind that duty was "weightier than a mountain," while death was "lighter than a feather." Indeed, death was idealized as something to be welcomed. Thus, soldiers, sailors, and airmen willingly sacrificed themselves in banzai charges, kamikaze aircraft, and kaiten submarines.

Japan's leaders now believed surrender as unthinkable for Japanese and contemptible in enemies, thus justifying abominable treatment of prisoners after prior years of very decent treatment of prisoners (also attributed to Bushido). In keeping with the samurai tradition, they also revered the sword, which led to the beheading of their captives. The International Military Tribunal for the Far East blamed Bushido as a contributing factor in Japanese atrocities.

Atrocities were part of every major Japanese land operation and were directed against both combatants and civilians. The demeaning training and disciplinary regimes in the Japanese services featured corporal punishment and probably contributed to the brutality of their personnel. The Japanese army employed ruses that their enemies considered unacceptable, including wearing enemy uniforms, booby-trapping corpses, and feigning surrender in order to kill would-be captors.

The atrocities could be blamed on other reasons. The Japanese were fighting a losing war, combating insurgencies, and trying to survive amid starvation. However, the atrocities had begun when Japan was winning the war.

Japanese servicemen were repeatedly told that their martial spirit was superior to that of their materialistic enemies, who would eventually succumb. Initially, the combination of Japanese ferocity and skill was frighteningly successful. However, the ultimate defeat of the Japanese discredited their cultural prejudice.