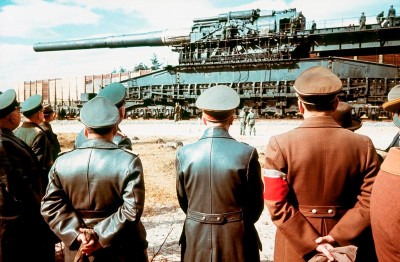 Dwight Eisenhower was named U.S. Army chief in Europe on June 25, 1942. Learn about this and the other important World War II events that occurred during 1942 below.

June 22: Fort Stevens, Oregon, escapes harm when it is shelled by the Japa­nese.

June 23: Rail-transported Parisian Jews are the first to go through the selection process for the Auschwitz gas chambers.

June 26: The important U-boat base of Bremen, Germany, is in flames following a massive RAF attack.

July 1: Some 250 alien saboteurs are arrested in the U.S. when the FBI uncovers a plot to blow up the Pennsylvania Railroad.

July 4: After eight months, the Nazi Germans finally prevail in the Battle of Sevastopol, the site of the Soviets' main naval base on the Black Sea. Germany's 11th Army takes 90,000 Soviets as prisoners.

July 5: The Soviet Union yields the Crimea to Germany.

Britain angers Joseph Stalin by imposing a moratorium on convoys to northern Russia. This follows a devastating Nazi German attack that sank 23 of 33 Allied ships in a convoy on the Barents Sea.

July 8: U.S. Pacific Fleet commander Admiral Chester Nimitz orders the invasion of the strategically significant Solomon island of Guadalcanal. His aim is to take an airfield being built by the Japanese, who have seized this island.

Below are more details that outline the events of World War II, including an American POW Fourth of July celebration in Mindanao, Philippines.

Nazi Germany builds railroad guns: From 1937, the German manufacturer Krupp designed and built two enormous railroad guns: "Gustav" and "Dora." The guns were arguably vulnerable to air attack. However, the existence of Europe's extensive railroad system and the ability to utilize poor-quality and rapidly repaired rails generally validated the railroad gun concept. Eventually, Dora was test-fired in 1942. It was manned by 1,420 men commanded by a brigadier general. Subsequently, it was employed to good effect in the Crimea, where it fired 40 seven-ton shells almost 30 miles into Sevastopol in mid-1942. It later fired 30 rounds into Warsaw during the 1944 uprising. The Gustav was never used in action.

Yugoslav partisans show courage: Moments before his death by hanging on June 22, 1942, Yugoslav partisan fighter Stjepan Filipovic shouts his defiance against his country's Nazi occupiers and his allegiance to the Yugoslav Communist Party. The Yugoslav partisans (officially the People's Liberation Army and Partisan Detachments of Yugoslavia) brought together an unlikely alliance of Balkan ethnic groups -- including Croats and Serbs -- through their commitment to communism. The partisans' cunning and courage (along with their sometimes savage brutality) and pressure from the advancing Red Army combined to free Yugoslavia from Nazi rule.

The "Mosquito Army" used to scout routes in North Africa: The Long Range Desert Group (originally the Long Range Patrol Group) was founded by Major Ralph Bagnold in 1940 to assist British military efforts in North Africa. Sometimes called the "Mosquito Army" and the "Libyan Taxi Service," the group's purpose was to disappear behind enemy lines in order to scout routes, gather intelligence, and launch raids. Members sometimes spent weeks or even months on dangerous missions in oppressive desert heat. LRDG teams were so cunning and skillful that, as Bagnold observed, raids seemed to come from "a fourth dimension," leaving Nazi German and Italian forces baffled and paralyzed.

Margaret Bourke-White, Life's valiant reporter: "The woman who had been torpedoed in the Mediterranean, strafed by the Luftwaffe, stranded on an Arctic island, bombarded in Moscow, and pulled out of the Chesapeake when her chopper crashed," wrote biographer Sean Callahan, "was known to the Life staff as 'Maggie the Indestructible.'" Margaret Bourke-White was a staff photographer for Life magazine during World War II, and she covered the war from its front lines in Italy, Russia, and Germany. Her book Dear Fatherland, Rest Quietly captures the atrocities of warfare, from the battlefield to Nazi death camps.

American POWs celebrate July 4th: The Japanese regime in Malaybalay camp in Mindanao, Philippines, seems to have been relatively benign, but the camp's celebration on the Fourth of July in 1942 was against regulations and dangerous. At Malaybalay, rations were far better than at Davao, where by October the U.S. prisoners had been moved. Prisoners of war of all nations sought to maintain a sense of national unity and to find diversions from the boredom and suffering of imprisonment. Mutual support was crucial to survival.

The next timeline covers major events of World War II in mid-July 1942.