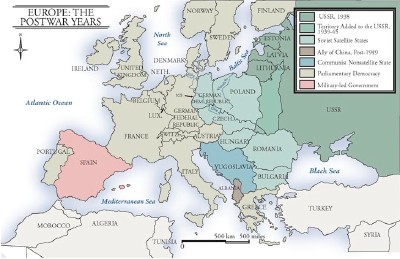 In the aftermath of World War II, Europe's boundaries were redrawn, the Japanese proclaimed a new constitution, and rebuilding continued. The following timeline includes important postwar event from 1946 and 1947.

April 28, 1946: The International Military Tribunal for the Far East indicts Japanese war minister Tojo Hideki as a war criminal, charging him with 55 counts. He will be sentenced to death in November 1948.

July 1, 1946: The United States detonates a plutonium bomb, "Able," off Bikini Atoll, as part of Operation Crossroads, an effort to learn more about the power of the atomic bomb. A second detonation, code-named "Baker," will follow on the 25th.

July 4, 1946: Fueled by a false kidnapping allegation, a pogrom in Kielce, Poland, claims the lives of some 40 Jews.

July 16, 1946: Forty-three members of the Waffen-SS are sentenced to death for the December 1944 Malmedy massacre of American POWs during the Battle of the Bulge. They eventually will be released.

October 1, 1946: High-ranking Nazi officials, including Hermann Göring, Hans Frank, Joachim von Ribbentrop, and Arthur Seyss-Inquart, are sentenced to hang by the Allied court at Nuremberg. Göring will escape this fate by taking his own life shortly before his scheduled execution.

November 3, 1946: A new Japanese constitution, one that resolves that the nation will never again "be visited with the horrors of war through the action of government," is proclaimed by Emperor Hirohito.

February 17, 1947: The United States launches The Voice of America, a pro-West radio station, to broadcast to the Soviet Union and Eastern Europe.

The news stories and images below reflect how World War II affected worldwide politics and culture in 1946 and 1947.

Postwar Europe's new boundaries are drawn: Nazi Germany's collapse in 1945 transformed the face of Europe. Millions became refugees as national boundaries were redrawn. Germany was partitioned into four zones of occupation. The Allied Zones merged into the Federal Republic of Germany in 1949, while the Soviet occupied zone became the German Democratic Republic. In the east, the Soviets expanded their borders at the expense of Germany, Finland, and Poland, and annexed the Baltic countries of Latvia, Estonia, and Lithuania. Communist states in the east soon arose to confront the western democracies.

German cities clean up, rebuild: During the war, approximately 50 percent of Nazi Germany's infrastructure was destroyed. Dresden was one of the hardest hit cities. Eight square miles of Dresden, which had boasted some of the most beautiful baroque architecture in Europe, were destroyed when Allied bombers dropped more than 5,000 tons of high explosives and incendiary bombs on the city in February 1945. Following the war, the ruins were cleared and replaced by modern structures. The Dresden Frauenkirche, a Lutheran church, was an exception, as its decaying ruins were left untouched. After the reunification of Germany, the church was restored for $175 million.

Homeless German children barter and beg: Young children sold or bartered whatever they could to survive on the streets of Berlin. A black market developed in Berlin, with cigarettes, liquor, and chocolate as three of the commodities most sought by Berliners from occupation troops. For many months after the war, German children roamed the streets scavenging or begging for food.

Atomic bomb tests are conducted at Bikini Atoll: The U.S. postwar nuclear tests at Bikini Atoll were designed to examine the effects of atomic bombs on naval vessels. Bikini's 167 inhabitants were forcibly relocated in early 1946, and 71 surplus and captured ships were anchored in the lagoon to serve as targets. Other targets included planes and 5,400 rats, goats, and pigs. Two separate atomic blasts in July 1946 sank some ships and left others heavily contaminated with radiation. Whatever the scientific gain, the highly public tests only exacerbated deteriorating relations between the U.S. and the Soviet Union.

Indians fight for independence from Britain: Indian statesmen and National Congress Party leaders Jawaharlal Nehru and Mohandas Gandhi viewed World War II as an opportunity to shed the yoke of British colonialism and establish an independent India. Though the British governor-general used his own authority to bring India into the war in 1939, Indian leaders pushed for self-government in exchange for cooperation. In 1942 the British Cripps Mission instituted an interim government and promised full independence after the war. More than two million Indians eventually served on the Allied side during the war, and 24,000 were killed. When the war ended in 1945, Indians pressed for the independence that was promised. On August 15, 1947, power was finally transferred and India was declared a free nation.

Women vote in Japanese election for the first time: Japanese women cast votes for the first time in their nation's history in what was perhaps the most visible sign of Japan's postwar political transformation. Frustrated by Japan's lack of progress with creating a new constitution, General Douglas MacArthur assigned the role to members of his own staff. The result was a constitution based more on British parliamentary rule than on the U.S. model. The document limited the emperor to a symbolic role and gave women the right to vote. Women reacted enthusiastically. In April 1946, millions of women voted in the election that gave Japan its first modern prime minister, Yoshida Shigeru.

In the next section, learn about the war crimes trials of former Japanese military and political figures, and see a timeline of post-World War II events for June 1947 to June 1948.