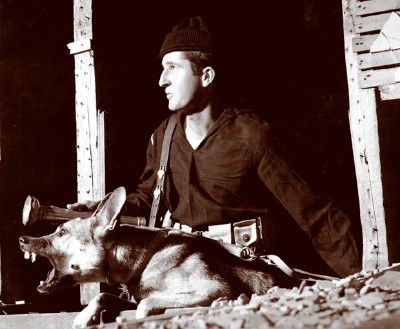 During August 1942, some 75,000 Jews from the Polish city of Lvov were murdered at the Belzec death camp. Learn about this and the other important World War II events that occurred during the month of August 1942 below.

August 12: Winston Churchill arrives in Moscow for a summit with Joseph Stalin, who will be disappointed with Churchill's assertion that U.S. and British forces will concentrate on driving Erwin Rommel out of North Africa rather than relieving the pressure on the Soviets with a second European front.

Japan goes on the offensive in China's Shantung Province, capitalizing on internal strife between Chinese Nationalist and Communist troops.

A contingent of Marine commandos known as Carlson's Raiders attacks Japanese units and a seaplane base on Makin Island, killing the entire Japanese garrison.

August 19: A racing pigeon named Tommy finds its way back to England from the Netherlands. It carries a message from the Dutch resistance that reveals the location of an important U-boat base.

August 20: With a portion of Guadalcanal in the hands of the Allies, 31 American fighters land safely on that island at Henderson Field.

August 21: The Nazi swastika is planted at the 18,500-foot summit of Mt. Elbrus in the Soviet Caucasus Mountains.

The Japanese suffer 800 casualties in an attempt to retake the airfield on Guadalcanal.

August 22: In the past two weeks, some 75,000 Jews from the Polish city of Lvov have been murdered at the Belzec death camp.

Below are more highlights and images that outline the details of World War II, including anti-Japanese propaganda and the use of war dogs.

Japan's unwise assault against U.S. defenders: Grossly underestimating the number of U.S. defenders, Colonel Ichiki Kiyono used only 900 men for a frontal assault on Marines defending Henderson Field on Guadalcanal on August 20-21, 1942. Nearly 800 Japanese were killed by the dug-in Marines. It was a mistake Japanese commanders repeated throughout the campaign. First Marine Division commander General A. A. Vandegrift wisely kept his forces in a defensive posture to protect the valuable airfield, moving reinforcements to critical points as needed.

Anti-Japanese propaganda delivered by the OWI: The U.S. Office of War Information (OWI) was created in June 1942 to consolidate the release of propaganda at home and overseas. It was common to use a stereotypical image of Japanese soldiers with slanted eyes engaged in evil acts. Japanese soldiers would be depicted with very sharp features carrying an American woman from a scene portraying hell. The message was that unless the Allies stopped the Japanese in the Pacific, horrors like this would happen in America.

War dogs ("K9 Corps") used in battle: The U.S. "K9 Corps" was created weeks after the U.S. entered the war. It initially accepted more than 30 breeds, but as the program progressed, the K9 Corps limited the breeds to German shepherds, Belgian sheepdogs, Doberman pinschers, farm collies, and giant schnauzers. To train each dog took from eight to 12 weeks. During the Battle of Guam in 1944, 25 Marine dogs were killed while serving as sentries, scouts, messengers, and on mine and booby-trap detection. America's allies and enemies also used dogs for these purposes. Nazi Germans primarily chose German shepherds and Doberman pinschers. Above, a sentry dog detects a nocturnal prowler.

The next timeline takes us through the World War II events that occurred during the rest of August and into early September 1942.

In 1942 raids by British Combined Operations on the coast of occupied Europe intensified. Commando raids at Bruneval and St. Nazaire, France, showed the value of an aggressive strategy in anticipation of an eventual invasion and liberation.

For the summer of 1942, the Combined Operations (under Louis Mountbatten) and the Home Forces (under Bernard Montgomery) planned a powerful raid, 10 times the size of St. Nazaire, against the French port of Dieppe. The purpose of the raid remains unclear. It may have been to test the practicality of seizing a port, to alarm the Nazi Germans, to "blood" the untried Second Canadian Division, or to reassure the Soviet Union.

Montgomery wished to cancel the upcoming raid, but after he left to command the Eighth Army, Mountbatten revived the plan. On August 19, 1942, 5,000 Canadians, 1,000 British troops, and 50 U.S. Rangers landed. They were covered by 237 warships and 70 squad­rons of medium bombers and fighters.

The scale of support did not guarantee success. Poor planning and intelligence compounded by bad luck turned the attack into a disaster. Photographic reconnaissance failed to find powerful Nazi German batteries, and the attackers had lost surprise when detected in the Channel. Only on the right flank, where commandos neutralized Nazi German batteries, were the landings successful. Shocked soldiers, who had been safe in Britain the day before, were marched off into captivity.

The raid failed disastrously, with heavy losses. Fifty percent of the Canadians became casualties. The raid at least showed the difficulties of a cross-channel invasion, and it persuaded Operation Overlord's planners of the need to bring their own port with them. It also convinced the Nazi Germans to place their big guns near the ports.

Many Canadians never forgave Winston Churchill for Dieppe, and debate continues over the necessity of a raid that was likely to fail.