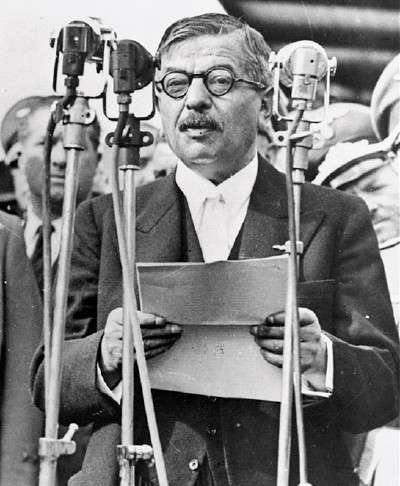 On October 4, 1942, Hermann Göring called World War II "the War of the Races." Learn about this and the other important World War II events that occurred during the month of October 1942 below.

October 3: Wernher von Braun, the Nazi rocket scientist who will ultimately go to the U.S. after the war and become one of the greatest minds at NASA, sees Nazi Germany successfully launch one of his earliest creations, the A4 ballistic missile.

October 4: Underscoring the Nazi obsession with Jewish genocide that will eventually contribute to the fall of the Reich, Reichsmarschall Hermann Göring claims that the war is "not the Second World War, [but] . . . the War of the Races."

October 7: In a concept that will develop into the Nuremberg Trials, Franklin Roosevelt says that the perpetrators of mass murder and other wartime atrocities will be judged at the conclusion of the war.

October 10: Citing the "splendid showing the Italians in America" have made during the war, U.S. attorney general Francis Biddle suspends the "enemy alien" status of some 600,000 resident Italian citizens.

October 11-12: The Allies have an open supply line to Guadalcanal in the wake of Japan's defeat in the Battle of Cape Esperance.

October 14: Guadalcanal's Henderson Field is badly damaged in a bombardment by the Japanese battleships Kongo and Haruna.

The Red Army manages to stand against yet another intense, five-division Nazi German attack in Stalingrad.

Below are more highlights and images that outline the details of World War II, including information on U.S. aircraft carriers and Ukrainian slave labor.

Ukrainian slave laborers starved and mistreated: Delighted by the 1941 Nazi conquest of the Ukraine, Hermann Göring considered murdering all of the region's males over the age of 15 to make living space for the "master race." But Nazi German labor shortages soon persuaded Göring to work Ukrainians to death as slave laborers. As 1942 wore on, a small number of Ukrainians were enticed to come and work in "beautiful Germany." Many more were brought by forced deportations. Considered subhuman according to Nazi ideology, Ukrainian workers were starved and mistreated. Well more than 10 million Ukrainians are believed to have been killed from 1939 to 1945, many in Allied bombings.

France's Pierre Laval aligns with Germany: "If the Germans are beaten, General de Gaulle will return," predicted Pierre Laval, prime minister of the Vichy government, in September 1942. "He will be supported by . . . the French people, and I shall be hanged." After the Nazi Germans invaded France in 1940, Laval was named vice premier in Philippe Pétain's Vichy government. Laval, convinced Nazi Germany would win the war, pressed for a Nazi German-French military alliance. Suspicious of his subordinate, Pétain had Laval dismissed, but Laval came back even stronger with the support of Nazi Germany and was named prime minister. When the Vichy government fell in 1945, Laval was shot by a firing squad -- not hanged.

Japanese submarine sinks the USS Wasp: Commissioned in 1940, the USS Wasp was a smaller model of the larger Yorktown class carriers. Prior to the war, it engaged in Atlantic patrol duty and ferried RAF planes to Malta. Sent to the Pacific in June 1942, the Wasp participated in the Guadalcanal landings and later provided cover for resupply convoys to the Solomons. It was sunk by the Japanese submarine I-19 southeast of San Cristobal Island while escorting troop transports to Guadalcanal.

Find out about other key World War II events that took place during October 1942 in the next section.

The United States entered World War II in 1941 with seven fleet carriers. By war's end, those numbers had quadrupled; the aircraft carrier had replaced the battleship as the preeminent surface ship of the Navy.

Airpower played a key role in the naval campaign against Japan, and the aircraft carrier provided the means to deliver that power over the vast distances of the Pacific. To that end, U.S. carriers were built without heavy armor or big guns so that they could carry more planes and fuel, and to maximize their speed and mobility.

The Essex Class aircraft carrier, introduced in 1943, was a 27,000-ton, 32-knot vessel capable of operating 90 to 100 aircraft. The complement generally included a mix of fighters, torpedo bombers, and dive-bombers. The proportion of fighters increased from about 25 percent of the total to 75 percent by the end of the war.

Though loaded with antiaircraft guns, the carriers also relied on escort ships -- destroyers, battleships, and cruisers -- for protection against enemy air and surface attack. Defense was enhanced by the carriers' own fighter protection -- known as Combat Air Patrol -- which remained overhead to deal with enemy air attacks.

Naval officers eventually realized that three or four carriers organized into groups with supporting battleships, cruisers, and destroyers offered the best combination of offensive punch and defensive firepower. These Task Groups could operate independently or in combination as a Fast Carrier Task Force, which provided considerable flexibility. Radar and combat information centers allowed the various ships and aircraft to coordinate offense and defense.

These task groups benefited from a logistical supply system that made around-the-clock offensive air operations against land targets possible. This put the Japanese, who were capable only of quick raids, at a distinct disadvantage.

Despite the prominence of the aircraft carrier, only five carrier-to-carrier battles were fought during the entire war. Most carrier operations were conducted against shipping and island bases and in support of amphibious landings.

Combining speed, mobility, and fearsome power, the Fast Carrier Task Forces made the island-hopping campaign of the Pacific war possible.